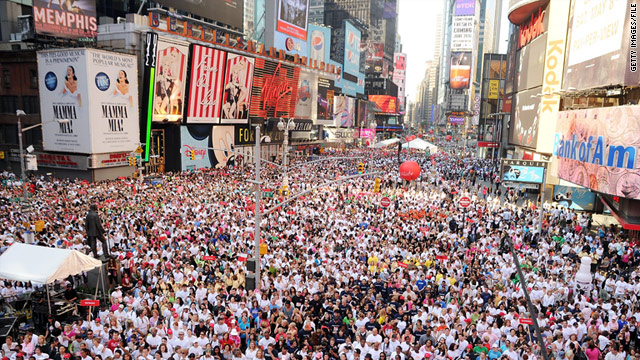 (CNN) -- So much for an economic downturn.

The number of tourists rose 6.8 percent from 2009 to surpass early projections of 47.5 million, putting the Big Apple on pace to meet its goal of attracting 50 million annual visitors by 2012, Bloomberg said.

The hospitality industry also added 6,600 jobs in 2010, employing more New Yorkers in the industry than ever, the mayor said.

"The industry employed more New Yorkers in 2010 than ever before, and the $31 billion visitors spent this year supported our restaurants, shops, hotels and cultural institutions. We're constantly looking for ways to strengthen and diversify our economy, and growing our tourism industry is an important part of that work."

Other highlights from the press conference included:

-- 39 million visitors were from the United States and 9.7 million were from abroad.

-- July 2010 set a record for total jobs in the hospitality industry with 323,200, and all of 2010 is expected to set a record when December job data is released later this month.

-- Broadway attendance so far this season is above 7.55 million, up 3.8 percent from this point last season.