Is blog TechCrunch unraveling in public? 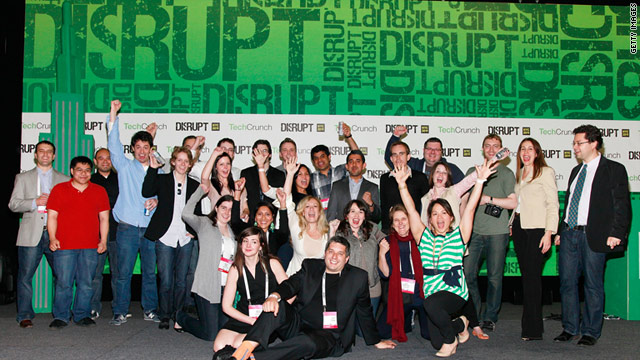 TechCrunch is one of the Internet's most popular tech blogs. Its staff holds an annual event in New York called TechCrunch Disrupt.
STORY HIGHLIGHTS
RELATED TOPICS

(CNN) -- What's a blogger to do when his blog is in turmoil?

Well, blog about it, of course.

Or, in the case of TechCrunch's MG Siegler, maybe "rant" is the more operative verb. On Tuesday morning, the powerful, frothy-mouthed tech blog's No. 2 man went off the digital rails, bemoaning a website that's "on the precipice" and "may be over" as we, the People of the Internet, know it.

"As soon as tomorrow, Mike may be thrown out of the company he founded," he wrote, referring to Michael Arrington, who founded TechCrunch. "Or he may not. No one knows. And if he is, he will be replaced by -- well, again, no one knows. No one knows much of anything. Certainly no one at TechCrunch. This site is about to change forever and we're in the total f---ing dark."

The controversy stems from Arrington's recent decision to start a venture capital firm that would fund some of the companies his blog writes about.

All of this happened out in the open, and AOL, which bought TechCrunch last September, seemed fine with it at first, according to media accounts. It even invested in Arrington's new $20 million venture, called CrunchBase.

But journalists and other media outlets started lobbing criticism at TechCrunch and AOL, saying it's unethical for a guy who runs a blog as big as TechCrunch to also control a massive pot of money that could help make or break the subjects of its articles.

Then AOL said Arrington had stepped down from his post and could write for the site, but only as an unpaid blogger.

Siegler has plenty to say about all of this (note: If you're in AOL's human resources department, I think you'll definitely want to keep reading):

"AOL seems to think that by cutting off the biggest conflicts -- ones so big that they'd obviously have to be disclosed -- that they'll be a bastion of integrity in the editorial landscape," he wrote.

"What a bunch of horse s---. The conflicts we need to worry about are the ones not disclosed."

David Carr, a media critic at The New York Times, doesn't buy this argument, in part because millions of dollars are at stake.

"TechCrunch is capable of tearing the limbs off a baby company, but it's been a generally nurturing place for start-ups when Mr. Arrington has skin in the game," he wrote in a much-circulated column.

Carr writes: "At this point, it seems that AOL executives would open up a lemonade stand in front of their headquarters if they thought it would help their bottom line. But the idea of a news site that covers every aspect of nascent tech companies sharing a brand name and founder with a venture capital firm financing these same companies seems almost comically over the line."

Other journalists have defended TechCrunch and Arrington.

"Arrington, remember, started TechCrunch not as a journalistic venture but instead to gather and share information about startups and to promote himself as an investor. He is returning to his roots," writes Jeff Jarvis, a journalism professor at the City University of New York.

Arrington isn't trying to be an impartial journalist, Jarvis writes on his blog, BuzzMachine. "He's trying to get information," he says. "He does it well. He has covered startups better than any big paper."

The Atlantic Wire says the whole thing is "playing out like a Shakespearean tragedy."

For his part, Siegler thinks his blog can survive all this turmoil -- even without Arrington. But TechCrunch won't be the same, he writes, since Arrington's savvy and personality percolate through all of the website's content.

"Could TechCrunch survive without Mike Arrington? Probably. We're doing so many pageviews now, and the machine is so profitable, that you can plug in other parts and it will run. But without him, it will not be the same. You might not think you'll miss what he brings, but you will. Quite often, you never even see what he brings. But it permeates the entire site."