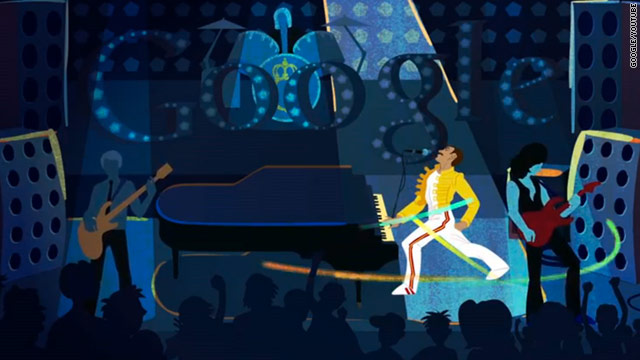 Google unveiled an animated doodle Monday to mark what would have been the 65th birthday of Queen singer Freddie Mercury.
STORY HIGHLIGHTS
RELATED TOPICS

(CNN) -- Google users around the world were rocking out to Queen on Monday -- except for in the U.S., where search engines will remain quiet until Tuesday.

Monday would have been the 65th birthday of Queen singer Freddie Mercury, the flamboyant, four-octave frontman who penned such enduring hits as "Bohemian Rhapsody" and "We Are the Champions."

To commemorate the day, Google added an animated doodle to its search page -- an appropriately over-the-top video clip set to Queen's "Don't Stop Me Now" that shows Mercury morphing into a space traveler, a bicyclist and a king on a throne flanked by lions and mustachioed bears.

As a nod to Queen's '70s-and-early-'80s-heyday, parts of the video have a retro, arcade-game style.

The doodle was showcased on Google's homepages around the world -- except for in the U.S., where, out of respect to the Labor Day holiday, the page remained unadorned.

Google planned to display the doodle in the U.S. Tuesday.

"Freddie was fully focused, never allowing anything or anyone to get in the way of his vision for the future," writes Queen guitarist Brian May in a guest Google blog post accompanying the doodle. "He was truly a free spirit. There are not many of these in the world. To achieve this, you have to be, like Freddie, fearless -- unafraid of upsetting anyone's apple cart."

Mercury was born September 5, 1946, in Zanzibar, which is now part of Tanzania, and moved to Britain as a teen-ager before joining Queen in 1971. He led the band through its 15-year run of radio smashes ("We Will Rock You," "Another One Bites the Dust") and operatic live shows. He died in 1991 at age 45 of an AIDS-related illness.

Earlier this year readers of Rolling Stone voted Mercury their second-favorite lead singer of all time, behind Robert Plant.

Google has been increasingly brightening its plain-wrapper homepage in recent years with colorful doodles, including animated clips honoring the birthday of silent-screen star Charlie Chaplin and a playable game to mark the 30th anniversary of the Pac-Man arcade classic.