San Francisco (CNN) -- While much of the technology industry scrambles to embrace tablets as the next big thing, veteran Jonathan Kaplan is applying his tech savvy to a completely different market: grilled-cheese sandwiches.

Even stranger than that? He's not alone.

On Tuesday, the inventor of the Flip video camera opened the Melt, the first of a proposed chain of grilled-cheese restaurants, in the hip San Francisco neighborhood called SoMa, or South of Market.

Kaplan managed to talk Sequoia Capital, the venture-capital firm that funds tech startups, into backing his grilled-cheese venture. He plans to open a handful of Melts across the city in the coming months and 500 restaurants nationwide in the next five years.

And he's now going up against Heidi Gibson, a former Oracle manager, and Nathan Pollak, a former consultant for tech firms, including Oracle. The pair runs the American Grilled Cheese Kitchen, a year-old gourmet sandwich shop also in SoMa that has attracted Lady Gaga and other celebrities.

Pollak's take on Kaplan's heavily financed upstart sounds similar to one you might hear from a scrappy Web startup that's about to have its niche product emulated by Google or Facebook.

"I'm not looking at it so much as competition but more as 'coopetition,' " Pollak said last week. "The fact that grilled cheese is now a legitimate food business and someone is taking a gamble on 500 locations. ... All of a sudden, there's a grilled-cheese industry, and this is great." 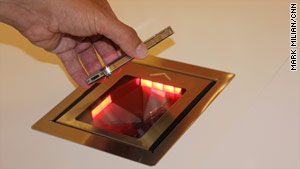 The Melt's counter has a built-in ordering system that lets customers scan a code on their cell phones.

While Pollak looks at his new restaurateur life as an escape from tech, Kaplan is shoehorning his industry knowledge into the Melt.

Kaplan had hardware manufacturers develop a special grill that can toast bread and cheese efficiently and reliably, with minimal effort from the staff. Kaplan tested the software -- yes, this grill runs apps -- over six months, tasting thousands of sandwiches until the process was tweaked to his liking, he said.

The Melt also deploys a mobile-ordering system that lets customers buy a sandwich on their phone and then scan a QR, or Quick Response code (those pixelated black-and-white squares) on the phone's screen when they arrive. The QR code triggers the grilling process; Kaplan hopes to deliver hot grilled-cheese sandwiches, which cost $5.95, within two minutes.

Other restaurants might be interested in licensing this technology, but the company has no plans to do so, said Michael Moritz, a Sequoia partner.

In addition to the prestige that comes with having Sequoia as an investor, the Melt has a powerhouse board of directors. Celebrity chef Michael Mina gives Kaplan advice on which soups to pair with which types of cheeses. Ron Johnson, the wizard of retail who directed the rise of the Apple Store and recently became CEO of J.C. Penney, is also on the board and provided capital.

Moritz and Johnson are betting on Kaplan because he has a history of successes. In addition to Pure Digital Technologies, the Flip camera maker that was bought by Cisco Systems in 2009 and shuttered two years later, Kaplan sold FamilyWonder, an entertainment-media company, to Sega. 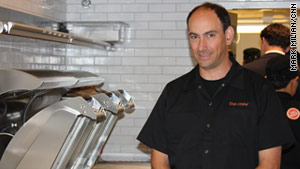 Jonathan Kaplan, who created the Flip video camera, is opening a chain of grilled-cheese restaurants.

"Jonathan is someone we've had a decade-long relationship with," Moritz said. "He's a man who can clearly express what he thinks it is that will delight a consumer, whether it's a video camera or a grilled-cheese sandwich."

Before the first location's opening, Kaplan expounded on the parallels between his past consumer-electronics ventures and sandwich shops while potential customers peeked through the windows and tugged on the door handles.

"I like consumers," Kaplan said. "This is totally 'consumer.' Look, there's a consumer coming through the door right now. I can't wait to talk to this guy."

The Melt is, by design, a business on a high trajectory, thanks to its factory-line infrastructure and fast-ordering tools. Kaplan's one regret is selling Flip to Cisco rather than taking it public, he said. This time, he's dedicated to a full-course meal.

"I know as much about the restaurant business as I knew about video cameras five years ago," Kaplan said. "Grilled cheese makes people happy. Food is fundamental to our daily lives."