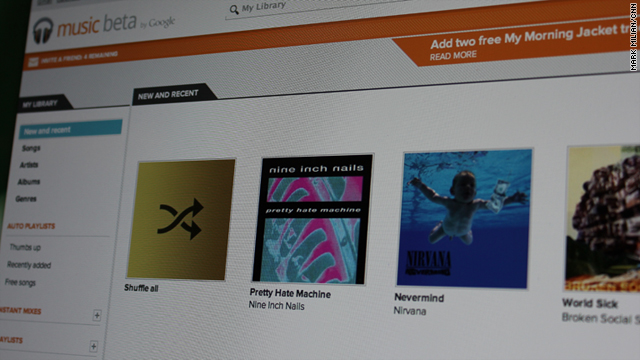 Google's Music Beta requires people to upload their entire music catalogs, even if other users have those songs on the servers
STORY HIGHLIGHTS
RELATED TOPICS

(CNN) -- A court ruling this week clears up some gray areas in cloud music.

The decision by the U.S. District Court in New York could pave the way for Google's Music, Amazon.com's Cloud Player, Dropbox and other providers of online storage services to add time-saving features.

Amazon and Google have been cautious in how they implemented their respective Web-based music lockers, a CNN study found. Amazon Cloud Drive and Music Beta by Google each upload users' entire music catalog and store separate copies of each track, a very lengthy process even with today's broadband Internet speeds, according to the study.

Technically, they could check a song for an exact match on their servers in order to save people the time of uploading everything. But they don't, in an effort either to play it safe amidst murky law or to partially appease record labels that the two technology companies have tried negotiating with before.

Apple is readying a program called iTunes Match, which is part of the upcoming iCloud suite of Web tools, that can do just that. For $25 per year, iTunes Match will scan a person's music library against the iTunes Store's catalog, and if it finds a match, it will unlock access to that track. Before doing this, Apple secured agreements with the record labels.

"It takes just minutes, not weeks," Apple CEO Steve Jobs said onstage at a conference in June. A "locker in the sky," like Google's or Amazon's, "takes weeks" to download a person's entire library, he said.

Dropbox, a fast-growing file-storage utility, previously used a method called "de-duplication," which is also used by MP3tunes. Dropbox's servers used to send a small digital fingerprint of each file a user was uploading in order to see if another person had already uploaded that same song, video or document. The company disabled the feature several months ago, according to a Web forum post by Dropbox co-founder Arash Ferdowsi.

"The feature is off now because the protocol has started getting abused," Ferdowsi wrote. "Dropbox is being tricked to 'upload' files that were never on the uploader's computer."

The closure appeared to target a type of software, called Dropship, which was designed to exploit this and facilitate illegal file sharing. The program is no longer functional after Dropbox changed its methods, said Dan DeFelippi, a programmer who hosted a version of Dropship on one of his online accounts after Dropbox executives tried to shut it down.

Ferdowsi said earlier that Dropbox planned to re-enable the de-duplication feature at some point. But it remains off, according to the CNN study. A spokeswoman for Dropbox declined to comment.

In the study, Tom Erbe, a computer music professor at the University of California, San Diego, edited the digital files for several popular songs and produced different versions to be uploaded to music-storage services. Erbe and CNN tested whether Cloud Drive, Music Beta and Dropbox would preserve the nuances in each track or instead return a "master copy," which provided insight into how these programs work.

Spokesmen for Amazon and Google didn't return requests for comment about whether they might implement such a feature.

"Many of the arguments raised by EMI weren't just about MP3tunes," Sherwin Siy, a legal analyst for digital-rights advocacy group Public Knowledge, wrote in a statement. "They set forth a theory of copyright that would have imperiled remote-storage services and other cloud applications. The court's rejection of these arguments deflates a lot of the legal uncertainty that record labels have tried to inject into these technological developments."

One possibility for Google is that it could combine its music service with the ubiquitous search engine in order to find songs that can be easily added to a person's personal locker, Siy and Wired each suggested in reports. However, Google is unlikely to do so, if it would like to negotiate to open, say, a music store or all-access streaming service at some point in the future.

The sign up page for the Google application notes: "Music Beta is only for legally acquired music."

"This outcome represents an understanding of copyright law more in line with how technology actually works, and avoids an absurd result where a music locker needs to waste server space by storing thousands of copies of identical files," Julie Samuels, an EFF legal analyst, wrote in a report. "This means more efficient music locker services, which is good news for music fans and for companies coming up with new and better ways to give those fans access to music they already own."

Michael Robertson, a digital-music pioneer and MP3tunes founder who is being sued, called the court ruling a 99% victory.

"Those in the industry that are building or contemplating personal music service like Amazon, Google, Grooveshark and Dropbox will surely have renewed confidence in offering similar unlicensed services," he wrote in a statement. "Our lawsuit with EMI will define legality of storage," he wrote in an online chat earlier this year.

An EMI spokesman expressed regret that the court has given safe harbor to "a business based on stolen music." At the same time, EMI celebrated the limited victories over MP3tunes' and Robertson's careless handling of certain aspects related to EMI's infringement claims.

"We will continue to fight," the EMI spokesman said in a statement.

Joseph DeMarco, a Columbia Law School professor, cautioned that the District Court's could be influenced by other cases, such as one in a Miami federal court involving the Hotfile online storage company.