Amazon, Dropbox, Google and you win in cloud-music decision 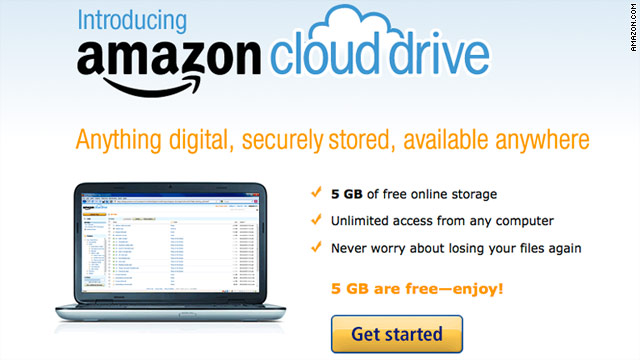 (WIRED) -- The disk drives powering Dropbox, Amazon's Cloud Drive, and Google Music likely issued a small sigh of relief Monday, after a federal court judge found that the MP3tunes cloud music service didn't violate copyright laws when it used only a single copy of a MP3 on its servers, rather than storing 50 copies for 50 users.

For Amazon and Google's nascent cloud music services, the decision clears the way for them to make it easier and faster for customers to use their music services; gives them legal cover to reduce the amount of disk space needed per user; makes it less likely that new customers of their music services will bust through their ISPs data caps when signing up; and clears the way for the companies to let users add songs found on webpages and through search to their lockers with a single-click -- all without either being sued by record labels for doing so.

Monday's decision centers on MP3tunes, a cloud-based online music locker service, that allows a customer to upload the music from their hard drives to a "locker" on the web, where they can play back the songs from any connected device.

But instead of uploading all of a user's songs, MP3tunes' software would check the library for previously uploaded songs and if a match existed, the song would just be added to the locker without requiring an upload.

No matter how many customers "uploaded" that song, MP3tunes kept only a single copy.

EMI, whose artists include Usher, Jay-Z and Lady Antebellum, sued MP3tunes over that practice and others. In a complicated federal court decision Monday (see Threat Level's write-up), a New York federal court judge ruled that the practice was legal -- but only insofar as the single storage method is done for exactly unique copies.

So for instance, all people who bought "Stairway to Heaven" as an MP3 from Amazon would have the exact same file (as determined by an MD5 Hash) and MP3tunes could just store a single copy.

However, the ruling makes clear that if MP3tunes scanned a customer's music collection and found "Stairway to Heaven" ripped from a CD with a slightly different file size, the company could not simply substitute a master copy. Instead, that customer would have to upload the file.

While the latter case still seems non-sensical, the ruling still must come as a relief to Google, Amazon and Dropbox.

Though Dropbox, an online storage provider, has never been sued by record labels, it uses the exact disk-space saving method that MP3tunes did.

If a Dropbox customer saves a file of any kind (text, movie or music) to their online hard drive, Dropbox checks the file's hash. If there is a match, then the file is instantly "added" to the user's online hard drives without the need to upload it. (This practice is not without controversy, due to the security risks it creates and because it makes it possible for users to be targeted in file-sharing suits.)

Given that the company's growing success and intention to become the hard drive of the future, it's highly likely the company would have been sued for the de-duping practice at some point.

On the other hand, both Amazon and Google launched online music services recently -- without striking deals with the labels. Both require every user to upload every song, regardless of whether other users had uploaded the exact same file. That leads to enormous bandwidth usage on the part of customers and disk space being wasted by Google and Amazon.

The other annoyance is that can take weeks of uploading files to move your entire collection, depending on your connection speed.

That design decision seemed to be in keeping with a decision in the Cablevision case, where the Second Circuit Appeals Court ruled that the cable company's DVR in the cloud was legal only because every user who told the service to record a given show got their own copy of the show made.

By contrast, Apple's new cloud-music service -- created with the blessing of the big labels, only uploads the songs it doesn't know -- and uses master files. In fact, if a customer has a low-quality copy of a song from one of those labels, Apple will automatically upgrade the song to a better one.

But Judge William H. Pauley III in this case said that MP3tunes' system complies with that ruling.

"Importantly, the system preserves the exact digital copy of each song uploaded to MP3tunes.com," Pauley ruled. "Thus, there is no "master copy" of any of EMI's songs stored on MP3tunes' computer servers."

So what's that mean for Google and Amazon?

Well, now for the first time, a federal court has cleared the way for them to fingerprint songs, even in a weakened way, Google and Amazon could quickly identify which of the songs on a user's hard drive it already has an exact copy of. Those could be added immediately, creating a better initial user experience.

The decision also said that allowing "sideloading" of songs was legal. That was the feature of MP3tunes that let users add songs they'd found on webpages, such as music blogs, directly to their online locker. That song/artist/link combo was then added to MP3tunes's search function so any other user could then add a song by searching for it in a custom search box.

That, the court ruled, was legal so long as a company removed the links and all songs added to lockers via that link when a copyright holder tells the site that the link is infringing on their copyright.

If that precedent holds, Google could pair up its search engine with its cloud-music service -- making a powerful combination, though not one that would endear the search giant to the record labels, which so far have not granted permission to Google to sell their songs.

But given Google's friend of the court briefs in the case and the fact the founder of MP3tunes, Michael Robertson, works at Google now after one of his other companies was acquired by it, don't rule that feature out too soon.