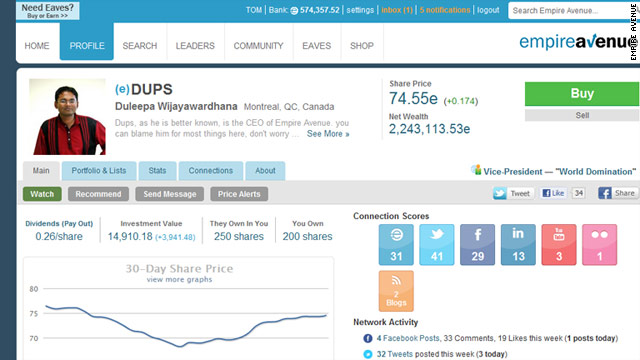 (CNN) -- If last week's volatile stock market was too much to bear, maybe it's time to start trading your friends, and strangers, based on their Facebook updates and how much they tweet.

Empire Avenue, an online, virtual stock market game launched last year, lets players do just that. Players choose their own ticker symbol, then build a portfolio by "buying and selling" others.

A player's stock goes up for social-media activity (such as "likes" on their Facebook actions or retweets and replies on Twitter) and activity on the Empire Avenue site.

Duleepa "Dups" Wijayawardhana, Empire Avenue's CEO, said the idea for the game came as creators pondered a way to measure the perceived value of social interaction.

"We thought that pure algorithmic analysis was no way near as fun, exciting or as valuable as when real people became involved, so we put in a very simple market where anyone could invest virtual currency in your online profiles and even earn virtual currency from all that you do," he said.

"Yes, and you would be right, there were definitely a couple of beers involved in that moment of enlightened thought."

On Tuesday, the Edmonton, Canada, startup announced it had secured $1.2 million in a new round of financing.

"Rather than buying a fancy zeppelin or, say, a tank full of diamond-clad singing sharks, Empire Avenue will use the investment to grow its team and further expand its platform, which is already generating strong revenue thanks to sales of virtual goods, currency and partnerships for branded virtual items and achievements," the group wrote in an announcement on the Empire Avenue blog.

The game, which can be played on its website or through Facebook, uses an increasingly popular online funding model. It's free to play but offers in-game items for a small price and has sponsored promotions.

As social media continues to become an engrained part of
Web users' daily lives, efforts to, in some way, measure people's social currency have begun cropping up.

Klout bills itself as the standard for online and Internet influence. The Web tool uses an algorithm to weigh how users interact with others on social networking sites and assigns them a score that goes up or down based on activity.

The site boasts that 80 million people have been assigned Klout scores since the tool went online in 2008.

While it's arguable whether the score has real-world applications, an increasing number of people in the tech world have begun using Klout scores to suggest they have ... well ... clout, to potential employers and others. Last month, buzzed-about music site Spotify let Klout users with a certain minimum score be among the first to sign up for the music site in the United States, presumably because those folks would most effectively spread the word to others through their established networks.

And in recent months, Klout has begun signing up partners that offer discounts and other incentives for users.

Time magazine seemed convinced, calling Klout one of its 50 best websites of 2011 on Tuesday.

Wijayawardhana has mixed feelings about the real-world application of measures of social influence.

"Pure algorithmic analysis of anything can only get you so far ... ," he said. "I'd like to think all these systems are games. They set scores on certain actions then give you a level which can change -- that's pretty much a game."

For Chris Voss, a marketing consultant and "serial entrepreneur" who also happens to have the third-highest share price on Empire Avenue, the game is about fun but, as he's played, has become a social network of its own.

"In essence, it's a fun way to connect and meet people in a new fashion where you can connect with their social media platforms and engage them on them," Voss said, adding that he's made friends and found clients through the game. "It's not boring, humdrum 'lets network' meetings."