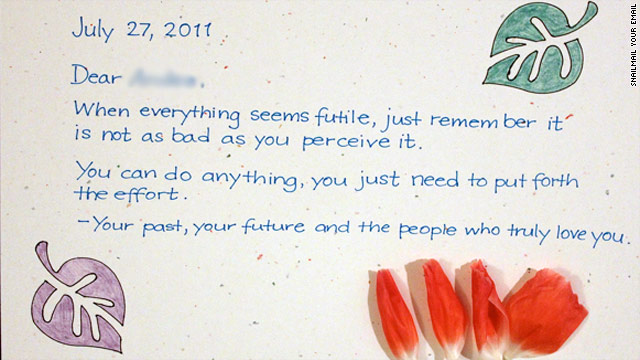 Snail Mail My Email users may request a doodle, flower petal or other extras to be included in their letters.
STORY HIGHLIGHTS
RELATED TOPICS

(CNN) -- Call it technology in reverse: Thousands of people are lining up online to have messages they could send in an instant delivered far more slowly.

And according to the creator of Snail Mail My Email, a monthlong volunteer project, that's the point.

"We move in such a fast-paced world that, sometimes, that world can feel kind of cold and impersonal," said Ivan Cash, a San Francisco designer and art director who birthed the project. "I'm very much a part of that fast-paced world ... but I think it's good for people to have that balance."

The concept is simple. Since July 15 (and until August 15), anyone interested has been able to e-mail a letter to the project's volunteers. They turn around and hand-write the letter -- complete with extras like a doodle, flower petal or lipstick kiss if desired -- and mail it to the recipient.

Cash, who recently returned to San Francisco after a stint working in Amsterdam, said he'd been an avid letter-writer in college and the few years after. He said there's something about the process of pulling out a pen and paper and crafting a message with your own hand that makes it more personal and well thought-out.

But eventually, he said, he began defaulting to e-mail and Facebook messages like a lot of people.

"Snail Mail My Email" was born as a way of getting back in touch with the joys of putting pen to paper, he said. 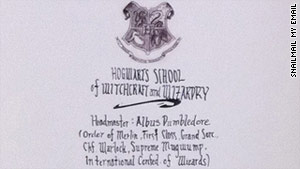 One "Snail Mail My Email" letter was an "acceptance" to Hogwarts academy.

"This isn't a project that's out to make money or be a forever solution," he said. "This is just a jumpstart to help raise awareness."

In the project's first two weeks, 2,300 letters were sent out.

"I'd originally thought I'd get five to 10 letters a week -- and I was hoping I'd even get that many," he said.

He'd originally planned to copy the letters himself. But when he got 1,000 e-mails on the fourth day, he considered canceling the project. After posting a request for help, he now has 134 volunteers literally lending a hand.

Kristin Huben of Montgomery, Illinois, is one of them.

She said she read about the project on a tech blog, sent her sister a letter through the site, then jumped when she saw Cash's call for help.

"I've always loved writing letters," said Huben, who said she's written nearly 50 so far. "I think it's really become romanticized in an era of e-mail and Twitter and whatever -- it's an amazing thing to send a letter or receive a letter and think, 'Someone took the time to do this.' "

So far, her letters have included one in French and one in Swedish, which she had to print out and trace because she wasn't familiar with how the punctuation worked. She expected lots of the letters to be funny.

"But, hands down, I would venture to say that 90% of them are love letters," she said. "I just feel so lucky to be part of a couple's love story. It's really sweet."

Cash has penned more than 75 letters. He says they've included the text of a man's proposal speech to his wife, letters to President Barack Obama and Sarah Palin, and even an acceptance letter to Hogwarts School of Wizardry and Witchcraft, from the "Harry Potter" series.

There's something about a personal letter that e-mail or texting can never replace, said Margaret Shepherd, author of "The Art of the Personal Letter: A Guide to Connecting Through the Written Word."

"People are expert at assessing how much effort you have put into something," said the Boston-based writer. "You know how great all these computer-generated movie effects are? It's still more impressive when you have the stuntman actually do the stunt."

Shepherd said she supports the "Snail Mail" project as a way of enlightening people about the value of a handwritten note. But she'd still prefer to see participants just pick up a pen themselves.

"Your mom wants to see your handwriting, and she wants to hear your voice, not a stranger's," she said.