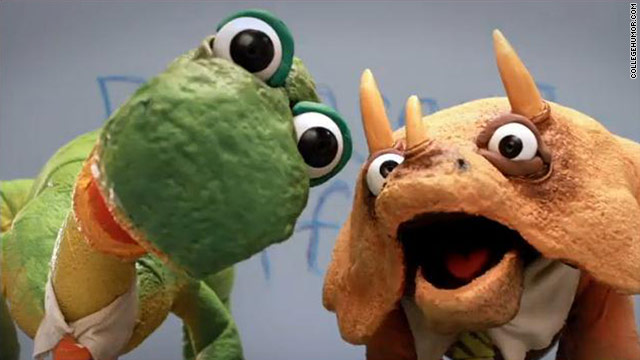 "Dinosaur Office," from CollegeHumor.com, is one of the first 3-D videos offered on the Nintendo 3DS.
STORY HIGHLIGHTS
RELATED TOPICS

(CNN) -- Nintendo 3DS users now have access to 3-D video. And they can launch it with a laugh.

Late last week, Nintendo launched its Nintendo Video service on the handheld gaming device -- the first of its kind to deliver 3-D without glasses.

Since it was introduced last year at the E3 video-game conference, it was clear that Nintendo planned to make the 3DS more than just a gaming system. The video launch is just another step in that direction for a device that features dual touchscreens, Wi-Fi and front and rear-facing cameras.

Earlier this month, a Netflix app let subscribers to that service stream movies on their 3DS.

Paul Greenberg, CEO of College Humor, said that while both 3-D and a video-game system might seem like weird matches for skits from his site, launching on the 3DS actually fits right in with College Humor's goals.

"Content is king ... but in the digital world, from my perspective, distribution is the ace," Greenberg said. "We're always looking for new channels and platforms."

Greenberg noted that in addition to 15 million monthly visitors to their site, College Humor has the seventh most-subscribed YouTube channel and a mobile site with more than 1 million users.

"We tried to get as creative as possible," he said. "Because it's so accessible without the glasses, we thought it's really a chance for us to explore a new medium, which is really what College Humor has been doing for years."

An animated short from College Humor, "Dinosaur Office," was one of a handful of 3-D videos that have been released for the device. In all, College Humor has prepared five animated, 3-D shorts exclusively for the 3DS, with plans for at least one of them to become a series.

"Dinosaur Office" was posted to the website in 2-D on Monday.

In the coming weeks, Nintendo says it will release 3-D videos from rock groups OK Go and Foster the People, the Blue Man Group and sports, action and movie trailer videos. A 3-D trailer for "Captain America" was one of its first round of videos.

"Nintendo 3DS is a unique platform for creativity," said Tony Elison, Nintendo of America's senior director and general manager of Network Business. "OK Go and all our partners are helping us make Nintendo Video a one-of-a-kind entertainment experience."