5 tips for spinning on the addictive Turntable.fm 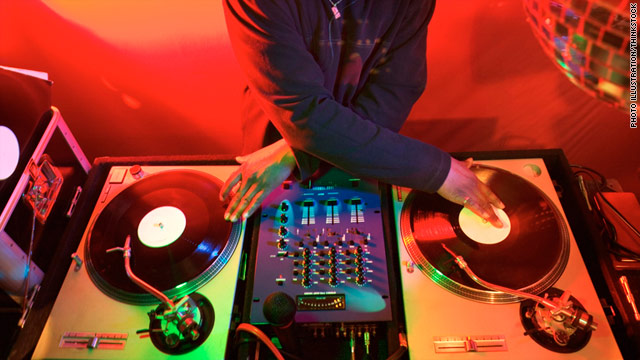 Turntable.fm is like that glorious new club that just opened up -- where good music is always playing.
STORY HIGHLIGHTS
RELATED TOPICS

Editor's note: Brenna Ehrlich and Andrea Bartz are the sarcastic brains behind humor blog and book Stuff Hipsters Hate. When they're not trolling Brooklyn for new material, Ehrlich works as an associate editor at Mashable.com, and Bartz is news editor at Psychology Today. Got a question about etiquette in the digital world? Contact them at netiquette@cnn.com.

(CNN) -- It has been said that music is the food of love.

Well, that may be true, but among many a tune lover, music is also the food of utter and complete high-horsed snobbery. Which is why new startup Turntable.fm is so addictive -- and why we all must tread carefully, lest we sully the glorious promise of such dulcet design.

If you're not already hunched in your cubicle, feverishly uploading mashups to your DJ queue (or shunning your spouse in the twilight hours, replacing lovin' with lamin'), allow us to explicate what you're missing:

Turntable.fm is basically a series of user-generated chatrooms in which music is played. The inhabitants of the room take turns DJing, while other users vote on whether their jams are "lame" or "awesome" -- "awesome" votes accrue users points, and, consequently, cachet among the community.

Right now, the service is still in beta. You can connect via Facebook, and you should be able to get access if you have a pal already spinning. Right now it's U.S.-only, so sorry rest of the world.

As of now, Turntable.fm is like that glorious new club that just opened up -- where good music is always playing, everyone is otherworldly attractive and no d-bags are around to spring sneak-attack grinds on unsuspecting dancers.

However, as TT.fm becomes more and more popular (it's up to 300,000 users), we're getting in serious danger of what we like to call "The Chatroulette Effect": An influx of ... well, it rhymes with "ick."

Therefore, to curb the "ickery," we've asked some of Turntable's top DJs for etiquette tips.

1. Don't tune out while spinning tunes

Would you want to go to a club where the DJ sets up his laptop, pushes "play" and then disappears into the back room to get drunk, wholly ignoring the crowd's protestations that "Horse With No Name" is not, in fact, a good dance track?

No, you would not. Unless you really dig America.

"The number one thing is not to go away from keyboard for very long while spinning," says DJ Alex Mizell. "The problem is that even if you have songs queued up for days, they might not be stylistically appropriate for what's currently playing in a room, they might have only recently been played or they might be hated for some other reason and the DJ is expected to skip the song in those situations."

Got that? Save your uncaring malaise for your real friends.

"But isn't that the definition of a music lover?" you might ask. Yes, having discerning taste in music is, indeed, a plus (especially if you enjoy handily crushing the self-esteem of folks who like "everything but rap and country"), but shutting someone down before the overture is over is just plain rude.

DJ Woooo -- a mysterious man named "Ethan" who reigns over TT.fm as its number-one user -- advises: "Don't 'lame' in the beginning of the song."

The same restraint should be exercised in the "chat" section of the room. Complain loudly about the quality of a jam -- or, you know, just generally be a troll -- and the moderator will gladly boot you.

You never know. The jam might get really hot after the creepy children's chorus is done crooning about Elijah.

In the digital dance that is TT.fm, there are five DJ spots -- one of which is lorded over by the creator of the room. Users can simply click on a vacate spot to start spinning those electronic jug band deep cuts.

However, issues can arise when a DJ abdicates his throne, causing the assembled masses to race to click-jack the spot. Usually, a kind of makeshift queue is established to avoid the melee.

"If it's obvious that the room has a consensus on who is going to DJ next, don't start clicking or you'll just be booted," says Neil Gaiman, popular American author -- and top TT.fmer.

And you don't want to get booted by Neil Gaiman. Because he's famous. And then all the other famous people and their followers will hate you, too.

Would you burst into a popular kid's party, headgear bobbing, drool running down your chin, and yell: "Hey, leave this super awesome party with the chocolate fountain and free camel rides and come play Scrabble with my mom and me!"

No. You would not. The same goes for shilling your own rooms on Turntable.fm.

"Don't show up in a room and immediately say 'Come to my Turntable Room! Needs DJs!' Most people won't click your link, and it's a little disruptive. Better to invite your friends, or politely ask if you start a new room, if people would be interested in joining," says Olga Nunes, musician and virtual DJ extraordinaire.

If you have no friends, well, then, we can't help you there. Have fun playing Scrabble.

You know that person who sits down in the middle of a movie and starts asking all kinds of annoying questions? Everyone hates that guy.

Consequently, don't be that dude who yells "n00b!" at poor fools who don't understand the rules. That just makes you a ... well, it rhymes with "ick."