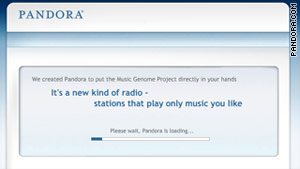 According to a news release on Pandora's blog, 36 million of those consumers are "monthly active users." It also said that in the past six months, Pandora has upped its market share of radio listening from 2.3% to 3.6%.

Pandora will celebrate this milestone with a flashy -- and Flash-free -- redesign. Tech-news site Mashable reports it will be available to those 100 million users during the next few weeks, with subscribers to Pandora One -- a premium, paid service with no ads and higher-quality audio -- getting access first.

He said Pandora's new look has been more than a year in the works and focuses on shedding functionality problems associated with Flash-based programs. He said the new HTML5 setup should iron out user experience qualms like slow loading times (as much as 10 seconds) and an overly complicated means of sharing media.

In the TechCrunch interview, Conrad said Pandora's iPad and iPhone applications, with their easy-to-use, streamlined version of the site, were a lot closer to what he wanted the service's user experience to be. As a result, the redesign shares some aesthetic qualities with the mobile application.

Pandora went public in June as part of a deluge of tech IPOs. Critics say its business model may never be profitable, and having more listeners (most of whom don't subscribe to the paid service) doesn't necessarily fix the problem.

Since Pandora has to pay more in royalties as more people listen to music, subscription and advertising revenues need to offset this increasing cost. So far they have not.

In its registration filing with the Securities and Exchange Commission when it went public, Pandora acknowledged this catch-22 of music distribution, saying, "If we cannot successfully earn revenue at a rate that exceeds the operational costs associated with increased listener hours, we may not be able to achieve or sustain profitability."

Pandora said in the filing that it expects operating losses to continue "through at least fiscal 2012."