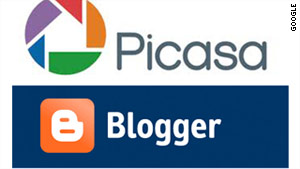 (Mashable) -- Say goodbye to the Picasa and Blogger names: Google intends to retire several non-Google name brands and rename them as Google products, Mashable has learned.

The move is part of a larger effort to unify its brand for the public launch of Google+, the search giant's social initiative.

Blogger and Picasa aren't going away, of course -- they're two of Google's most popular products. Instead, according to two sources familiar with the matter, Google intends to rename Picasa "Google Photos" and Blogger will become "Google Blogs."

However, a source familiar with Google's Blogger division told tech blog GigaOm that the search giant has no plans to retire the Blogger brand. And Google just announced updates to Blogger last week.

Several other Google brands are likely to be affected, though our sources made it clear that YouTube would not be rebranded. The technology giant shut down Google Video, its failed web video service, in May.

Although the rebranding could upset some existing customers, it also gives Google the ability to completely integrate both services into Google+.

Rebranding coming in next six weeks

The transition from Picasa and Blogger to Google Photos and Google Blogs will occur "in a month to a month and a half," we've been told.

The date aligns with the likely public launch of Google+. Mashable has been told to expect the public debut of Google+ on or before July 31. The date is important because it's the day all private Google Profiles will be deleted.

We believe Google doesn't want to have private profiles after the public Google+ launch. Instead, the company is likely to encourage users who want more privacy to use Circles to curate their friend groups.

The brand unification effort will be the largest in company history -- it's never renamed a property as large as Blogger. The popular blog creation service has been receiving a lot of extra love recently. In March, Google announced that Blogger would receive a major overhaul. We doubt many people expected that the overhaul would include a rebranding, though.

Google+ makes perfect sense for Blogger and Picasa -- they are both social products that improve as more people use them.