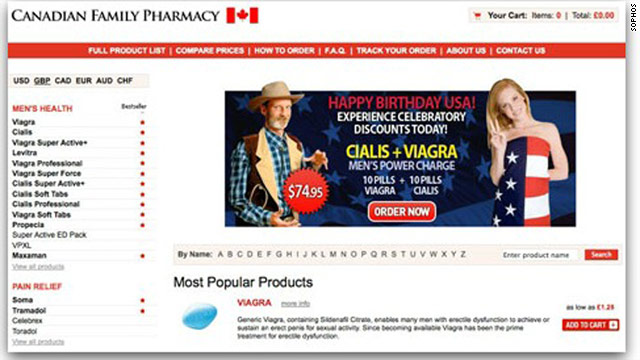 An e-mail that appears to be an invite to Google+ actually leads to this (admittedly patriotic) spam site.
STORY HIGHLIGHTS
RELATED TOPICS

(CNN) -- OK, Google+, you're a bona fide Web sensation now. Which is to say, you've inspired your very own spam.

An e-mail claiming to be an invite to the search giant's much ballyhooed answer to Facebook was making the rounds on Monday. But, turns out, it's just one more way to buy illicit Viagra on the internet.

Google+ was unveiled last week, but so far invitations to try out the new social-networking service have mostly just been sent to bloggers, journalists and others in the technology world. Google opened a brief window last week for members to invite others, but is otherwise keeping Plus's doors locked for now.

The result (and raise your hand if you think this is an accident) has been lots of jealous folks reading other people talk about Google+ and wanting to get in on the action themselves.

"The spammers are no doubt hoping that the e-mail will be too hard to resist for many people eager to see Google's new social network," web security firm Sophos wrote on their Naked Security blog, "although just how many users will be tempted to buy drugs online is a mystery."

The e-mail looks like the ones sent when a friend adds you to a "circle" on Google+ before you've joined the site. But instead of leading to Google+, the links in the e-mail produce an apparent opportunity to buy Cialis, Viagra, Propecia and other pharmaceutical little helpers.

The links do not appaear to upload viruses or other malware.

The Google+ effort isn't the only careful-where-you-click issue Sophos is currently monitoring.

A new round of naughty-looking links are popping up on Facebook under titles like "[Video] This is what Happend to his Ex GirlFriend!" Clicking the often anatomically expressive link in your newsfeed leads to a page asking you to confirm that you're older than 18.

Click "yes" on this page and you've joined the party, sharing the same link in your news feed.

Sophos says that if you've clicked it, make sure to immediately remove the link from your feed, then check your profile to see if you've "liked" anything you don't actually like.

"Can I respectfully suggest that if you keep falling for scams like this, you try and get your kicks elsewhere on the internet?" he wrote. "There's plenty of photos and videos of naked ladies out on the web which you can peruse at your leisure, without the risk of flooding the newsfeeds of your Facebook friends."