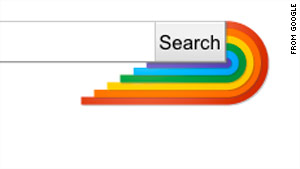 If you Google terms like "gay" or "homosexuality" this month, a rainbow pops up by the search bar.
STORY HIGHLIGHTS

(CNN) -- Google creates "doodles" for all kinds of random occasions.

The search engine changed -- or doodled -- the logo on its home page in celebration of the painter Paul Cezanne's 172nd birthday; Robert Louis Stevenson's 160th birthday; the first day of school in Poland; and Pac-Man's 30th anniversary. All of these, with the exception of Poland, which appeared only in that country, were automatically visible to everyone who visited Google.com.

But for Gay Pride Month -- which, in case you didn't notice the parade in the city center, is happening now -- the company took a much less visible approach.

It's one that's stirred up criticism from the gay community.

There's never been an actual Google Doodle in honor of Gay Pride. Instead, during June, a little rainbow pops up next to Google's search bar only when users search for certain "pride-related" terms, including, "gay," "lesbian," "homosexuality," "LGBT," "marriage equality," "bisexual" and "transgender."

"During the month of June, Google is celebrating lesbian, gay, bisexual and transgender (LGBT) Pride," the company said in an e-mail. "For some Pride-related search queries, we are showing a rainbow at the end of the search bar."

So why hide this feature beneath specific searches?

A company spokeswoman did not provide specifics.

"We enjoy celebrating holidays and special events at Google. As you may imagine, it's difficult for us to choose which events to celebrate on our site, and have a long list of those we'd like to celebrate in the future," a statement said.

Critics say Google is hiding the feature to avoid criticism from anti-gay groups, whose members may be less likely to search "pride-related" terms.

The hidden doodle "should keep the six-color rainbow, a symbol universally associated with gay pride ever since San Francisco artist Gilbert Baker created it 33 years ago, from appearing on the pages of those who are still opposed to gay rights. And keep Google from having to deal with any backlash," writes Nicholas Jackson on The Atlantic's tech site.

Jackson, who is gay, calls the fact that Google hasn't created a full-blown doodle in honor of Gay Pride "disappointing."

"Instead of boldly declaring its support of Gay and Lesbian Pride Month, Google added a tiny rainbow to the end of its search bar," he writes.

Instinct Magazine says Google "should be commended" for doing anything:

"Google has lead the tech industry in supporting our community, and the latest addition to its arsenal of inclusion is a welcome boost in the right direction."

What do you think? Let us know in the comments.