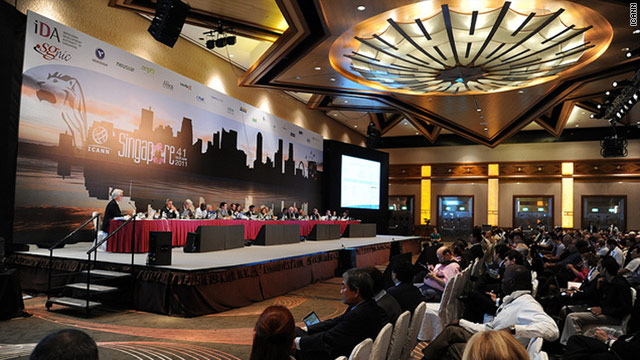 (CNN) -- On Monday, the Internet Corporation for Assigned Names and Numbers (ICANN) voted to allow a new array of Internet domain endings.

But what does that mean?

The change means that the familiar ".com," ".org" and ".net" could be getting a lot more company in the next year or so. As our colleagues at CNNMoney said, "Forget .com -- here's .coke."

Here's a breakdown of the vote that ICANN chairman Peter Dengate said "will usher in a new Internet age."

It's the nonprofit group that assigns addresses to Internet service providers.

The organization was founded in 1998, has members from all over the world and is dedicated to "keeping the Internet secure, stable and interoperable," according to ICANN's website.

What did they change?

Under the new rule, people will be able to apply to ICANN to register most any word, in any language, as their domain ending.

So, I can set up my own domain?

That depends. Are you rich? Are you an established corporation or government? If the answer to any of the above is "no," then probably not.

ICANN will be charging at least $185,000 per domain application (more in the case of buyers who want one all to themselves). So it seems pretty clear that this will largely be for corporations, and maybe some governments.

It also will cost money to set up and maintain the domain, so something like .google or .ibm will a lot more likely to happen than, say, .douggross.

What are the benefits?

For retailers and others, the advantage is branding. Having your own domain could lend a sense of legitimacy on the web. Because of the difficulty of getting an application through ICANN's process, a personalized domain ending will be an authenticity watermark of sorts.

For the common Web user, the answer is a little more hazy.

One early thought is that it could cut down on phishing and other online scam attempts. If you knew that only domains with your banks' names in the suffix were legitimate, it would make it harder for scammers to trick you by steering you to a fake site.

For those planning to apply, there are almost sure to be some legal battles.

Remember the dispute between Apple, the computer company, and Apple, the record label that was home to The Beatles? We'll probably see more of that when more than one bidder wants exclusive use of a name.

Some observers also believe the domain names could usher in a new era of cybersquatting, although companies seeking custom domain suffixes must undergo a screening process designed to weed out unscrupulous applicants.

One of ICANN's rules -- than no domains that are "confusingly similar" will be allowed -- could actually complicate matters on that front.

For average users, maybe it'll be harder to remember the addresses of sites you haven't bookmarked?

A lot of companies, governments and the like aren't saying for competition reasons.

But there are several organizations that have announced plans to file for particular domain endings. Among them: .unicef, .paris, .nyc, .canon and .hitachi.

It was not immediately clear Monday whether those groups and companies would redirect their current Web addresses to the new ones once they're launched.

When will this happen?

ICANN is scheduled to begin reviewing applications early next year and says we should start seeing new domains in July 2012.