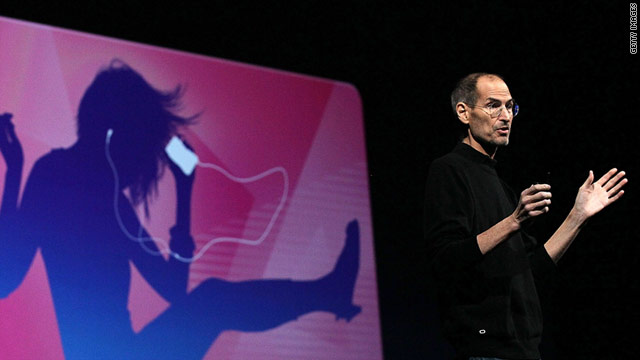 (CNN) -- The folks at Amazon and Google must have been wringing their hands on Monday when Apple CEO Steve Jobs showed off a new service called iTunes Match.

That all-important "one more thing" from Apple's software presentation is part of the iCloud Web application and storage suite. It was a coup of sorts -- and Apple's win over competitors could be attributed to Jobs' experience at Pixar Animation Studios, which he co-founded.

Here's what Apple pulled off: With a free iCloud account, all songs purchased from iTunes can be accessed from any Apple gadget or computer with iTunes installed. (Amazon has done something similar with Cloud Drive.)

For $25 a year, iTunes in the Cloud stores a maximum of 25,000 songs on Apple's servers, ready to access from various gizmos. And, importantly, Apple did this with the blessing of the music industry.

Amazon and Google, on the other hand, couldn't get the record labels to agree to their terms. Cloud Drive and Google's Music Beta require users to upload every single track to their servers, a process that can take hours or days.

Apple, the largest music retailer, somehow managed to convince the labels and publishers to go along with its plan to use a scan-and-match process. iTunes Match looks at the user's music library and grants the keys to high-quality versions of those songs. It uses a don't-ask-don't-tell policy: Napster who?

How did Apple pull off something Amazon and Google couldn't, despite them launching cloud-music services first?

For one, Apple has a history with the music industry as long as any technology company's.

"It's really hard to get the labels to give you the rights that you need," Jobs said in a 2003 interview at the first All Things Digital conference. "And I don't see them sprinkling those rights around everywhere, letting a thousand flowers grow quite yet."

In that interview eight years ago, Jobs described the vast divide between technology and entertainment executives, and he talked about how he bridged it.

"One of the things I learned at Pixar is the technology industries and the content industries do not understand each other," he said. "In Silicon Valley and at most technology companies, I swear that most people still think the creative process is a bunch of guys in their early 30s, sitting on a couch, drinking beer and thinking of jokes. No, they really do. That's how television is made, they think; that's how movies are made."

"People in Hollywood and in the content industries, they think technology is something you just write a check for and buy," Jobs said. "They don't understand the creative element of technology.

"These are like ships passing in the night," the Apple co-founder added.

Music execs also may have seen Google as an enemy because its search engine is a popular place to find websites serving pirated albums, according to an article in the Hollywood Reporter.

For the ribbon-cutting of the iTunes Store in 2003, Apple broke through the barriers with a list of predictions, Jobs said. Apple executives provided the record labels with a glimpse into their crystal ball, and nine months later, Jobs' team was getting calls from the music companies, he said.

"The record companies, the most important thing they do is not distribute music," Jobs said. "It's picking which of 500 people are going to be the next Sheryl Crow. That's what they do. And some of them do it quite well. And it's an intuitive process. There's not enough data."

Because technology companies treat record labels like clearing houses for content, Silicon Valley bigwigs have trouble getting through the door, Jobs suggested. So it was perhaps Jobs' expertise from Pixar, during his exodus period from Apple, that has given him the edge to secure risky deals with entertainment giants first.