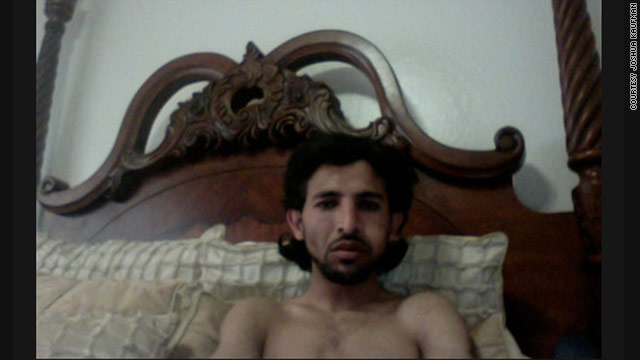 A stolen laptop's camera took this photo of an Oakland man. He was later arrested and accused of possessing stolen property.
STORY HIGHLIGHTS

But technology came to the rescue. A trail of digital clues, including photos recorded by the camera on Kaufman's stolen laptop and posted by him on the Internet, helped police crack the case, ending a 10-week saga that became a Web sensation.

On Wednesday, Kaufman got his computer back.

"It was a relief that all my effort paid off," the digital designer told CNN Thursday. "I was excited that it worked."

It all started after Kaufman discovered the burglary and filed a report with the Oakland police. Then he began to gather information about his stolen MacBook using theft-tracking software called Hidden, which uses the laptop's webcam and other tools to surreptitiously capture photos and screen shots of the computer in use.

What he discovered was startling: Photos of an unidentified man using his computer. Several grainy images showed the man staring into the laptop. Another photo showed him asleep on his couch.

Over the ensuing weeks the security software showed Kaufman some 500 images taken from his computer. Screen shots also revealed someone deleting Kaufman's Apple account and logging into Google.

"I was amazed and impressed that it (the software) was working. I never really tested it out, so I didn't know if it was going to work or not," Kaufman said. At the same time, he said, "I was thinking, 'This sucks. Someone has my computer and is viewing my stuff, and there's nothing I can do about it.' "

Kaufman went to an Oakland police investigator with the information, but the detective didn't follow up, he said.

"His first response was, 'I hate to be the one to tell you this, but we don't have the resources to deal with this right now. We're just too busy.' "

So on May 27, Kaufman created a Tumblr blog, This Guy Has My MacBook, and posted some of the photos there, and on his Twitter account.

"I set up the blog because I was frustrated and I wanted my story to get some more media attention [to get the police to act]," he said.

"Within hours it had thousands of tweets and thousand of likes from Facebook."

From there the media picked up the story. On Tuesday Kaufman said he got a call from an Oakland police spokesperson, who told him investigators would be following up on his case immediately.

"Thanks to the power of the Internet, I have the attention of the Oakland police, who are tracking this guy down RIGHT NOW!" he posted that evening.

Later that night, Oakland police arrested limo driver Muthanna Aldebashi, 27, of Oakland. Kaufman believes the key piece of evidence was Aldebashi's Gmail address, which pointed to his employer, a limo company in nearby Berkeley, California. 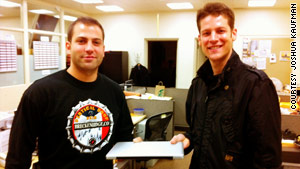 Joshua Kaufman, right, gets his stolen laptop back on Wednesday from the Oakland police.

Police recovered Kaufman's laptop Tuesday night from Aldebashi's home and returned it to him on Wednesday morning, he said. Kaufman said he's not convinced that Aldebashi was the burglar, however.

"I don't think he burglarized my house. I think he bought it off the street from someone who needed some fast cash," he said.

Aldebashi told investigators the computer was a gift from a relative, according to a story in Thursday's Oakland Tribune.

As for Kaufman, he has fielded more than 50 interview requests and gained more than 5,000 followers on Twitter. He's also been marveling at the power of technology to help solve a crime.

"I think it's fantastic that these tools are available, and there's no reason not to install it on your laptops -- unless you're really creeped out by the privacy implications."