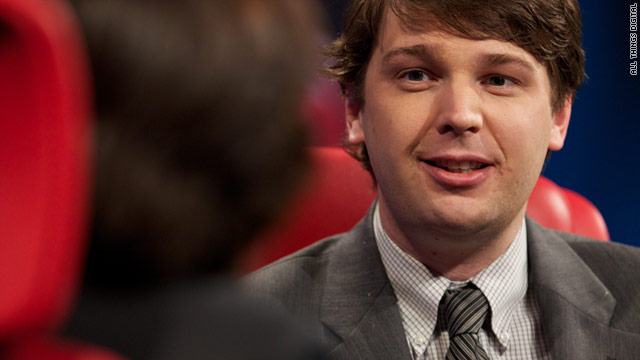 Groupon CEO Andrew Mason changes his style and dresses in a suit for the All Things Digital conference.
STORY HIGHLIGHTS
RELATED TOPICS

For starters, he took the stage at the All Things Digital conference on Wednesday in a suit and tie, rather than his Zuckerbergian rumpled garb. "Just trying to show some professionalism," he quipped.

Another way Mason demonstrated his maturity as a businessman: He says he's no longer bothered by others copying his ideas. "I'm on board!" the quirky Chicagoan shrieked.

Mason said having studied music in college, the natural response to the type of imitation affecting Groupon was to cry plagiarism. But in business, it's called competition, he said. The phenomenon used to bother him immensely, he said.

"We were proud of that idea in the same way that anybody who invents something would be proud," Mason said. "As obvious as it seems now, it wasn't obvious at the time."

Groupon debuted in November 2008 with its daily deals delivered via e-mail. Since then, we've seen the rise of dozens of competitors, including LivingSocial, which used to make Facebook quizzes, and Gilt Groupe, which specializes in luxury fashion items.

Groupon, too, has soared. It has 8,000 employees, half of whom make sales calls to retailers in the cities the company serves worldwide.

Mason has stopped worrying much about what he perceives as idea theft. It's fortunate timing, because the day before he took the stage, Google was showing off a new local-deals feature as part of Google Wallet. It launched in Portland, Oregon, on Wednesday.

"One thing, I think, where they've got us," Mason said about Google in his deadpan style, "is the Buzz integration is just seamless."

Groupon had news of its own for Wednesday. The company launched Groupon Now in New York and San Francisco, following its debut in Chicago last month. The service is built for phones and provides a smorgasbord of deals from neighborhood stores that are only available at certain times.

The new self-service tools, which allows store owners to set the dates and duration of their offers, could help slow competitors. Mason has said that merchants will often turn to other daily-deal sites when they become impatient with Groupon's backlog.

Live Nation and Expedia are helping Groupon grow into other areas. The two have partnered to bring deal e-mails for events and travel tickets, respectively.