Oprah? Or Opera? E-mailers get confused 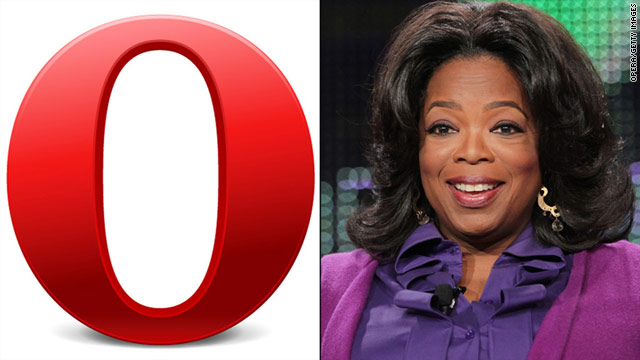 Opera or Oprah? Some people have been confusing the company that makes Web browsers with the retiring talk show queen.
STORY HIGHLIGHTS
RELATED TOPICS

(CNN) -- First came the flurry of Obama-Osama malaprops. And now this: E-mailers have been confusing Opera Software, a company that makes Web and mobile browsers, with Oprah Winfrey, the retiring talk show queen.

A post on Opera's blog commemorated Winfrey's final TV show by publishing some of the e-mails the Norwegian company has received seeking money, appearances on Oprah's show, or, in one case, Hannah Montana tickets.

"Today is the last Oprah show in the history of television. To us in Opera this is really sad news," wrote community manager Espen André Øverdahl on Wednesday.

"This show has brought us great joy throughout the years. We've been receiving lots of mail from Oprah fans, asking us questions, complaining or simply just opening up, telling us about their lives."

An Opera spokesperson said the company has received at least 150 e-mails intended for Oprah since 2007. The bulk of the mails got an automatic response, since they were sent to a system that flagged them as "Oprah" mail. But some found their way into staffers' personal inboxes.

To their credit, the folks at Opera wrote back -- with kindness and a sense of humor.

One 17-year-old from Mississippi wanted to appear on Winfrey's show to donate his or her long hair to charity. Opera responded, "... we are big fans of hair in Opera. We have a guy called _____ here as well, and his hair is crazy long. I don't know if it's as long as yours, but if you come to Norway sometime we should arrange a hair battle between you guys."

Another e-mailer, a 9-year-old, wrote about seeing "Hannah Montana" and her dad, Billy Ray Cyrus, on Winfrey's show. If Oprah ever did another show like that, could she send four tickets?

Opera's response: "You have reached Opera Software now -- not Oprah, I'm afraid. We make something called browsers. It's what you use when you get on the Internet on your family's computer. You know, when you go to Facebook and other fun stuff.

"I just wanted to give you some music tips. Although Hannah and Billy are great ... there is a lot of other cool stuff out there. Have you heard about NOFX, King Fantastic or Tortoise? You should check it out!"

In response to a question from CNN, Opera communications manager Pål Unanue-Zahl wrote, "We like to have fun here at Opera Software, and that is reflected in the responses we sent out."

Opera also sent confused correspondents the contact information for Winfrey's media empire. Unanue-Zahl said the company has had no direct contact with Oprah over the misunderstanding.

Oprah ended her popular daytime talk show Wednesday after 25 years to devote more time to other projects. Opera, meanwhile, is preparing to showcase its browsers at next week's Computex 2011 trade show in Taiwan.