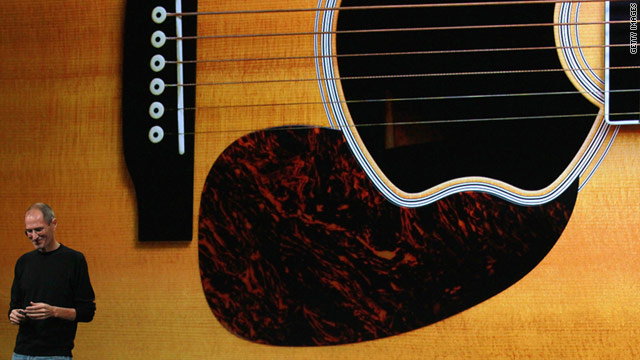 (CNN) -- Apple has dominated digital music sales for years with its iTunes store, which allows shoppers to download songs and other content.

Now it's looking increasingly likely that the leading tech company will enter the growing music-streaming market as well.

Apple has signed a cloud-music licensing agreement with EMI Music and is close to completing deals with two other music labels, according to a report by tech news site CNET, citing multiple music industry sources.

Such a product would throw Apple into direct competition with Amazon and Google, both of which recently launched cloud-based music streaming services of their own. Such services store songs on Web servers, where they are accessible from any device with an Internet connection, instead of on a user's hard drive.

Apple signed a similar licensing deal with Warner Music last month. Its negotiations with Sony Music Group and Universal Music Group, the remaining of the four major labels, could be wrapped up as early as next week, CNET reports.

Apple did not immediately respond to a request for comment by CNN.

Record labels, seeking to maintain revenue in the struggling music industry, have maintained that streaming music requires a license that is separate from offering songs for sale. But both Amazon and Google launched their cloud-based services without any licensing deals in place.

By cooperating with the music industry on licensing songs, Apple would stake out a different position from its rivals. This could give an Apple music-streaming product a leg up on the competition, writes MG Siegler for TechCrunch:

"So the labels, which for the better part of a decade now have been looking for someone, anyone to help counter Apple's power in their business, is turning right back to Apple when they need help. And Apple will obviously gladly welcome them with open arms. After all, with these licenses, Apple will have secured the cloud music high ground despite being the last to launch," he writes.

"Think about it. With these agreements, Apple is likely going to be able to do the one thing that is absolutely crucial for cloud music to take off: offer library syncing without uploading.

"In other words, Apple now likely be able to do what Lala (the company Apple bought in late 2009 and subsequently shut down) was able to do: scan your hard drive for songs and let you play those songs from their servers without having to upload them yourself."

Google's Music Beta, announced earlier this month, lets users upload their music to Google's servers and migrate their playlists and data from iTunes. The music player can be accessed from a Web browser as well as from an Android phone or tablet, and users can add up to 20,000 songs for free.

That followed Amazon's launch in March of its rival Cloud Player, which lets consumers upload their music to Amazon's servers and play them via the Web or Android. Users are given 5 GB of free storage but must pay for additional space.