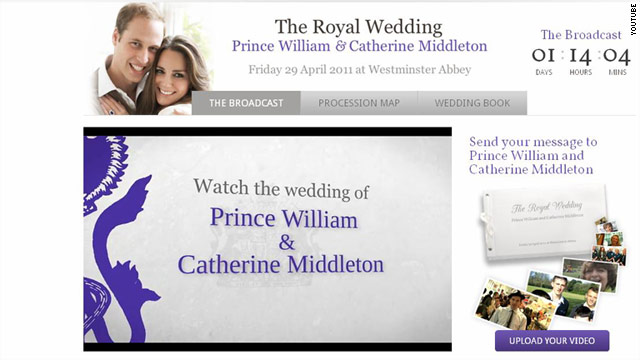 (CNN) -- Can't get to a television set for the royal wedding on Friday?

Fear not. The British royal family is making sure that anyone with access to the Web will be able to keep up with the nuptials of Prince William and Kate Middleton.

The ceremony is scheduled to begin at 11 a.m. in London (6 a.m. ET). Some of the official channels where you can follow along include:

The wedding will be streamed live on The Royal Channel, the official YouTube account of the monarchy. The broadcast will begin at 10 a.m. London time (5 a.m. ET).

The live feed will include commentary, historical facts and a look at the procession to and from the ceremony.

The @clarencehouse Twitter feed, the official feed of the youngest generation of royals, including William, will be providing live updates throughout the day.

The feed, with more than 50,000 followers, has been giving sneak peeks at everything from flowers being used to decorate Westminster Abbey to the wedding's official commemorative stamp.

Looking for tweets about the blessed event? Search for the hashtag #rw2011.

Once Friday's pomp and circumstance begins, photo sets will be uploaded to the British monarchy's official Flickr gallery.

Already up on the site are several sets showing preparations for the wedding.

If you're on Facebook anyway (meaning not at work, since nobody monitors their news feed on the clock, right?), you can keep track of updates on the British monarchy's page.

Of course, virtually every media outlet on the Web will be providing coverage of the wedding.

To choose one completely at random, CNN will provide live online and televised coverage beginning at 4 a.m. ET. The coverage will incorporate the network's Twitter and Facebook presences, as well as iReport. And you'll also find updates on Unveiled, CNN.com's royal wedding blog.

Selected tweets with the hashtag #CNNtv will be used on CNN and CNN International.

Also, GetGlue, the entertainment-based mobile app, is awarding special stickers for users who check in to various wedding-themed CNN shows throughout the week.