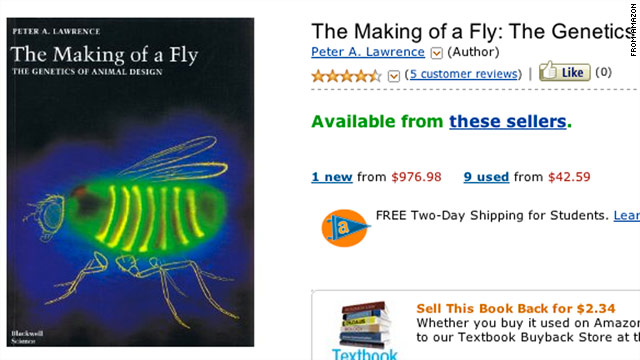 An independent seller apparently listed the book "The Making of a Fly" for more than $23 million last week.
STORY HIGHLIGHTS
RELATED TOPICS

This unthinkable sticker price for "The Making of a Fly" on Amazon.com was spotted on April 18 by Michael Eisen, an evolutionary biologist and blogger.

The market-blind book listing was not the result of uncontrollable demand for Peter Lawrence's "classic work in developmental biology," Eisen writes.

Instead, it appears it was sparked by a robot price war.

"What's fascinating about all this is both the seemingly endless possibilities for both chaos and mischief," writes Eisen, who works at the University of California at Berkeley and blogs at a site called "it is NOT junk." "It seems impossible that we stumbled onto the only example of this kind of upward pricing spiral."

Eisen watched the robot price war from April 8 to 18 and calculated that two booksellers were automatically adjusting their prices against each other.

The other equation automatically set its price at 0.9983 times the price of the other book. So the prices of the two books escalated in tandem into the millions, with the second book always selling for slightly less than the first. (Not that that matters much when you're selling a book about flies for millions of dollars).

The incident highlights a little-known fact about e-commerce sites such as Amazon: Often, people don't create and update prices; computer algorithms do.

Individual booksellers on Amazon and other sites pay third-party companies for algorithm services that automatically update prices. Some of these computer programs purportedly work very well, getting sellers up to 60% more sales because they underbid the competition automatically and repeatedly.

The advantages are clear: If you're managing dozens of sale items on Amazon or eBay, it's difficult if not impossible to keep up with all of them.

"If you have more than 100 items, then it's impossible for you to manually focus on the price," said Victor Rosenman, CEO of a company called Feedvisor, which sells algorithm services to people who use Amazon.

"It's pretty much like the stock exchange. What you see there is the prices changing all the time -- but they never change drastically. Sometimes it's a dollar here a dollar there -- maybe $10. For a book, it probably would be pennies."

These algorithms vary widely in quality, however, as the Amazon case shows.

Sellers easily can avoid the million-dollar-book situation if they set price ceilings and floors on their pricing algorithms, so that the competitive bidding shuts off at a certain dollar mark, Rosenman said.

"It's like you put on the gas and didn't have the handbrake," he said. "This is a very basic mistake. So I am very, very surprised this thing happened at all."

Some of these algorithm services give clients control over their equations, letting them edit them as they go. That doesn't always work out well, Rosenman said.

His company handles all of this for clients, but charges a hefty fee, taking 1% to 5% of the seller's profits and charging monthly fees of $500 to a few thousand dollars a month, depending on the size of the contract, he said.

Robot-adjusted prices may change a few times an hour or a few times a day, he said, depending on how competitive a price war becomes.

These algorithms try to detect if they're working against other computers or humans and then they adjust strategy accordingly, he said.

They also take other factors into consideration, including how well the seller is rated by Amazon users. A seller with a great track record may be able to sell books for a slightly higher price because of his or her reputation.

Eisen, who first blogged about the overpriced book, writes that "alas, somebody ultimately noticed" the wild price of "The Making of a Fly." On April 19, he says, the price of the book plummeted from more than $23 million to $106.23.

On Monday afternoon, the new book was listed at $976.98, and Eisen thinks the price is escalating again.

Neither Amazon nor either of the individual book sellers responded to requests for comment from CNN.

If nothing else, Eisen writes, the situation earned the fly-book's author some bragging rights: "Peter Lawrence can now comfortably boast that one of the biggest and most respected companies on Earth valued his great book at $23,698,655.93 (plus $3.99 shipping)."