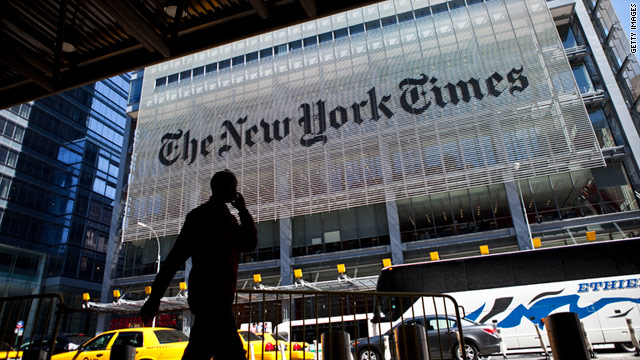 The New York Times says it sold 100,000 digital subscriptions last month at a time when its business has been struggling.
STORY HIGHLIGHTS
RELATED TOPICS

The New York Times may have silenced some of them on Thursday. The venerable news outlet announced that 100,000 people had signed up for digital subscriptions in the first month since they were offered.

The Times erected a pay wall on its site March 28, forcing readers to subscribe if they wanted to click on more than 20 articles per month. The digital plans range from $15 to $35 for four weeks of access, depending on which device you want to read the articles on. An early promotion let subscribers pay 99 cents per week.

So, 100,000 new digital subscriptions in four weeks for the nation's third-largest newspaper -- is that an impressive figure?

Daley believes that Web-only subscription rate could be hard for the Times to sustain and grow.

"There's no virtuous cycle in a subscription business like this," he said. "Over time, the sales are actually going to get harder than easier."

By June 30, the Times will start giving Apple 30% of revenue from users who sign up for a subscription via its app on the iPhone or iPad, said Eileen Murphy, a spokeswoman for the news organization.

As of last month, the Times' app for Apple devices had been downloaded 7.8 million times, she said.

"Apple creates innovative products that our readers love, and it is important for us to make the Times available on those platforms where our readers want us to be," she wrote in an e-mail.

Let's crunch a few numbers: Apple sold 4.69 million iPads in the last three months -- "every iPad 2 we were able to make," Peter Oppenheimer, the financial chief said -- versus the Times's 100,000 digital plans.

The Times' financial health, like that of many print-centric media companies, is less than stellar. The company's profits fell sharply over the last few months due to a struggling advertising market.

"You have a business still whose core revenue model is changing dramatically," Daley said. "You're talking about a company that is half advertising-based, half subscription-based."

The newspaper's circulation and its subscription revenue have fallen while newsprint costs have risen. That's despite online postings from a few outspoken cost crunchers who discovered that it's cheaper in some cases to subscribe to the paper's Sunday print edition, which comes with free digital access, than to buy a digital-only plan.