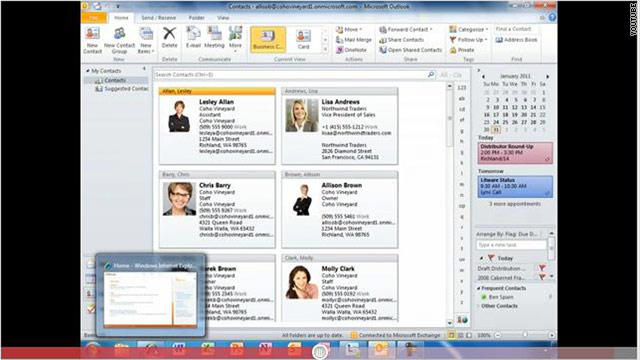 (CNN) -- Office 365, Microsoft's set of business tools that includes an online-only option, opened up for a public round of beta testing on Tuesday.

In conjunction with the beta release, Windows opened the Office 365 Marketplace, an online store where customers can add apps and services from Microsoft and partner companies to their accounts.

The major shift Microsoft is pushing with this round of its widely used office tools is the ability to use them via cloud computing. The most basic version of the new Office 365, as it stands, would be completely web-based, with no desktop tools required.

That service would cost $6 a month for each user.

By making the tools available remotely, Microsoft would let users access the suite from any device that's enabled to do so. (And what office doesn't want to make it easer to take your work home with you, right?).

Cloud-based computing like this has been a major push for Microsoft in recent months.

"We are betting big on the cloud with our most successful product, and we are investing heavily both in the product engineering side and the physical infrastructure side," Tim O'Brien, Microsoft's senior director of platform strategy, said last year when the company first unveiled a Web-based version of its Office software.

Office 365 was opened for closed, or invitation-only, testing last fall. Microsoft says more than 100,000 organizations signed on to put it through its paces.

Parties interested in the Office 365 beta can apply to join the beta test on Microsoft's site.