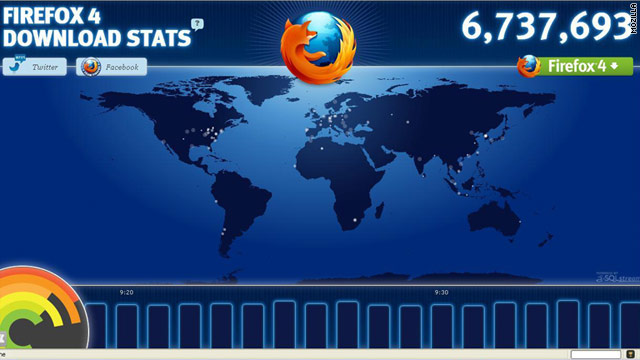 (CNN) -- Firefox 4, the latest version of Mozilla's free, open-source Web browser, was downloaded around 5 million times in its first 24 hours.

According to Mozilla's website, downloads were up to 6.8 million by 10 a.m. ET Wednesday, just over a day after the update was released.

Minutes before Firefox 4 turned a day old early Wednesday morning, it was on the verge of crossing 5 million, CNET noted.

That adoption rate is impressive. By comparison, Microsoft's Internet Explorer 9, rolled out last week, was downloaded about 2.3 million times during the first day it was available.

The latest version of Firefox features full support for emerging coding language HTML 5, tabs for apps, a redesigned user interface and a feature that helps users organize tabs for the websites they visit frequently.

It also includes a "do not track" feature, designed to tell sites you visit that you don't want to be tracked for advertising purposes. The sites still have to comply for it to work.

The browser is available for download in 80 languages on Windows, Mac and Linux and will be available soon on Android and Maemo devices, according to Mozilla.

Wednesday's number for Firefox is significantly less than the 8 million or so downloads for Firefox 3 in its first day in 2008. But Mozilla heavily promoted that release, telling users it wanted their help to set a world record for fast downloads.

Internet Explorer remains the Web's most popular browser, with about 43 percent of the market, according to analytics site StatCounter.

Firefox is second, and gaining, with about 30 percent. In third place is Google's Chrome browser, which has about 17 percent.