Rihanna's online 'palindrome' and the ad world's quest for viral 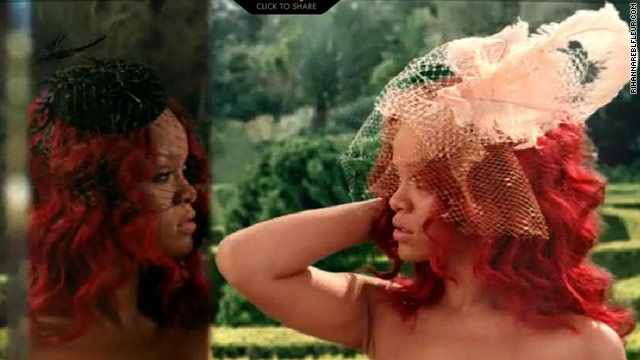 (CNN) -- The Grammys weren't the only place fans were watching Rihanna this weekend.

A promotional video for the pop singer's new Reb'l Fleur fragrance is threatening to go viral, getting watched about 500,000 times in less than three days, according to the video's Web page.

The site features a specially designed player that lets the user scroll the video either forward or backwards. It's shot to play perfectly both ways.

The video opens with a split-screen image of dual Rihannas. Depending on where the user moves the cursor, it either leads a dark, bad-girl version of the singer away from what appear to be several very interested lovers or leads a goodness-and-light version of her toward them.

The clip was created by New York ad agency Droga 5. They're predicting, perhaps with a healthy dose of optimism, that the video could be viewed as many as 20 million times.

The creators are calling the one-minute video a palindrome -- a sequence, usually made up of words, that reads the same forward and backward.

Technically, it doesn't quite qualify as a palindrome since the video doesn't end up back where it began. But for the sake of rewarding creativity, we'll let that slide.

Performers, and the Web, have certainly enjoyed playing with palindromes, and their near cousins, before.

Cibo Matto (the Japanese duo + backing musician Sean Lennon), used split-screen to play a story both backward and forward in 2005's "Sugar Water," which picked up some fans after they performed the song on "Buffy the Vampire Slayer."

And Kingdom of Loathing, the ridiculously amusing spoof online role-playing game, features a location called The Palindome, which hosts "monsters" like Bob Racecar, the Evil Olive, a Drab Bard and Dr. Awkward.

The Rihanna video also casts a light on an ever-growing host of companies trying to use viral marketing to sell their products. Who needs TV time when millions of people are clicking on the online ad you posted for free?

For their part, Web users have shown they are are willing to endure a sales pitch as long as they're entertained along the way.

Look no further than the last year's Old Spice ads. They caught folks' attention on TV, but really took off online.

The YouTube video for "The Man Your Man Could Smell Like" has a gob-smacking 29.5 million views and "Questions" has another 18.7 million.

(Watch those ads, plus the latest, "Scent Vacation.")

And in a nod to the Web's power, Volkswagen released its too-cute "Mini-Darth Vader" ad the week before its high-price slot during the Super Bowl.

The result is an even more impressive 29 million views on YouTube in less than two weeks.

So, maybe 20 million isn't shooting too high for Rihanna. Worst case, its creators can always back things up and start over.

What did we miss? What are your favorite online palindromes or viral ads?