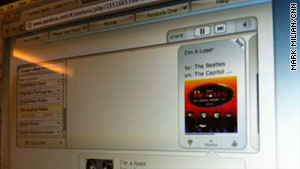 A Pandora station for the Beatles, or any artist for that matter, can only play four of the band's songs in three hours.
STORY HIGHLIGHTS
RELATED TOPICS

(CNN) -- Pandora's internet radio service doesn't force variety onto listeners for their health. In this case, it's the law, says founder Tim Westergren.

The website lets users type in the names of their favorite songs or musicians in order to get a radio station customized to their tastes.

Newcomers to Pandora, and even some longtime listeners, have wondered why, if they type in, say, "The Beatles," they can't just get a marathon of Fab Four tracks.

The answer is tucked away in a support page on the company's website and was addressed directly by its founder last week.

Pandora operates under a government statutory license, a class of agreements managed by the U.S. Copyright Royalty Board. This allows Pandora to play a maximum of four songs by a particular artist during a three-hour listening session, the company says.

To match Pandora's catalog, companies like Apple and Rhapsody, which offer downloads or on-demand streaming, have to negotiate agreements with the four major labels and dozens of music publishers.

Spotify, the popular European streaming music service, has spent more than a year trying to convince labels to sign on and blames the complex U.S. music industry for delays.

"It would be way too hard to license directly with over 80,000 artists in our collection -- the majority of whom are independent," Pandora's Westergren wrote on the question-and-answer service Quora.

The tradeoff: Having to endure songs from Ringo's solo records inbetween Beatles hits.