The bad metaphors are real; the students aren't 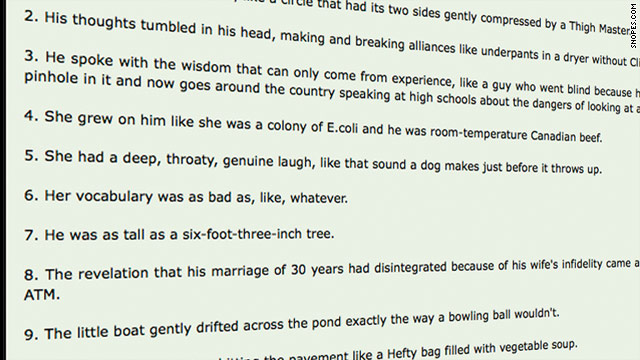 A list of "unintentionally bad student writing" is making the rounds again online. It's real, but was written on purpose by adults.
STORY HIGHLIGHTS
RELATED TOPICS

(CNN) -- It's an internet hit as classic as that book by a British guy you were supposed to read in eighth grade but didn't.

A hilarious list of clunky writing passages -- ostensibly created by teachers compiling their students' greatest misses -- has been around for years, but seems to have gotten new life recently on Facebook and Twitter.

To be sure, the lists are full of howlers.

I mean, who can resist similes like this: "Her face was a perfect oval, like a circle that had its two sides gently compressed by a ThighMaster."

Or gems like this: "John and Mary had never met. They were like two hummingbirds who had also never met." And, finally: "She grew on him like she was a colony of E. coli and he was room-temperature Canadian beef."

But if some of the hilarity seems too good to be true, that's because it is.

The lines are real. But they were written by grown-ups trying to be funny, not kids accidentally saying the darnedest things.

The quotes that populate most of the links (generally to various blogs) actually come from the Washington Post's "Style Invitational," a long-running writers forum.

The paper invited readers in 1995, and again in 1999, to submit "painfully bad analogies."

The arbiters of online bunk at Snopes.com did a takedown on the lists in 2008.

"Collections of bad student writing in which pupils mangle the basics of history, science and literature and invent new ways of torturing syntax, grammar, spelling and style are common fodder for books, articles and internet-circulated lists," Barbara Mikkelson wrote on that site. "However, deliberate attempts at bad writing are another popular form of amusement ...

"The collection of labored and overwrought similes and metaphors included in the example quoted above are an instance of the latter category of bad writing, not the former."

That fact, of course, doesn't stop the various versions of the list from swearing on a stack of Strunk & White's "Elements of Style" that it's real. (And this guy, on YouTube, couldn't make it through the list without cracking up).

"Okay, these are analogies and metaphors found in ACTUAL high school essays, so these aren't made up," reads one.

Says another: "Every year, English teachers from across the country can submit their collections of actual analogies and metaphors found in high school essays. These excerpts are published each year to the amusement of teachers across the country. Here are last year's winners."

Many of the posts popping up on Facebook recently were written a while back, although recent comments suggest they're still getting clicks. Others were blogged in just the past couple of months.

Silly student efforts are an internet favorite. In a separate Snopes entry, Mikkelson said the site found such a list as early as 1991, posted on a humor newsgroup.

So don't expect questionable student-writing lists to go away. They're a tradition, just like, as one writer puts it, "fathers chasing kids around with power tools."