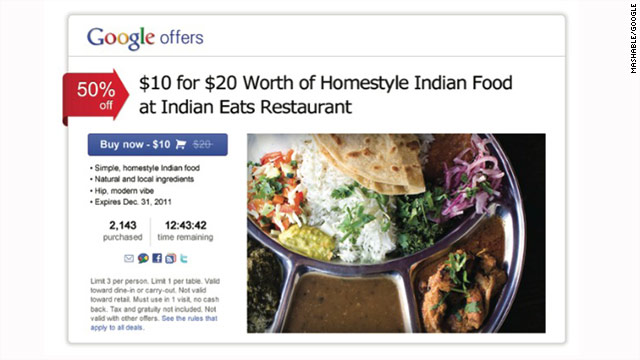 We have the documents to prove it -- one of our sources has sent us a confidential fact sheet straight from the Googleplex about the company's new group buying service.

"Google Offers is a new product to help potential customers and clientele find great deals in their area through a daily email," the fact sheet says.

Google Offers looks and operates much like Groupon or LivingSocial. Users receive an e-mail with a local deal-of-the-day. They then have the opportunity to buy that deal within a specific time limit (we assume 24 hours). Once enough people have made the purchase, the Google Offer is triggered and users get that all-too-familiar $10 for $20 deal for that Indian restaurant you've never tried.

From what we can tell, Google Offers will be powered by Google Checkout. It also includes Facebook, Twitter, Google Reader, Google Buzz and e-mail sharing options.

Google is actively reaching out to businesses now to get them on board with Offers. It even apparently has a writing team in place to craft the write-up for offers.

Google famously tried to buy Groupon for $6 billion just a few months ago in order to bolster its local advertising business. Groupon rejected the offer though and is instead preparing for a $15 billion IPO.

The search giant clearly isn't giving this market up without a fight, though. With its vast reach, huge resources and brand recognition, it could prove to be a powerful player in the space.

We're going to be watching these developments closely. Look here to see the entire fact sheet Google is sending to local businesses:

Google has responded to our inquiry and sent us the following statement:

"Google is communicating with small businesses to enlist their support and participation in a test of a pre-paid offers/vouchers program. This initiative is part of an ongoing effort at Google to make new products, such as the recent Offer Ads beta, that connect businesses with customers in new ways. We do not have more details to share at this time, but will keep you posted."

We've also learned that Google will pay out 80% of a business' revenue share three days after its deal runs. Google will hold the remaining 20% for 60 days to cover refunds before sending the rest.