Why did Google's Eric Schmidt step down? 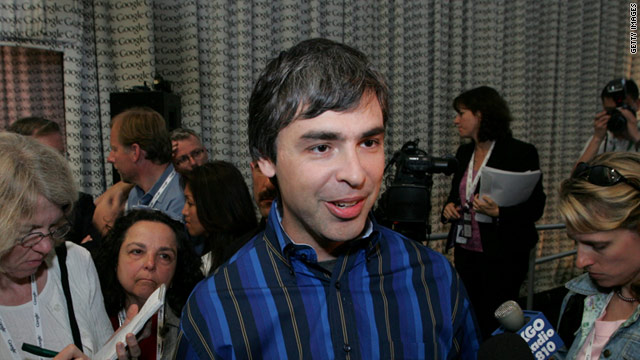 Google co-founder Larry Page will take over as CEO on April 4. His public persona is largely unknown.
STORY HIGHLIGHTS

(CNN) -- Apple isn't the only high-profile tech company that announced a major change in its executive ranks this week.

Google co-founder Larry Page will replace Eric Schmidt as CEO of the Mountain View, California, company on April 4, Google said Thursday. The news came three days after Apple announced its CEO, Steve Jobs, is taking an indefinite medical leave, and on the same day Hewlett-Packard said it was reshuffling its board of directors.

Schmidt, who guided Google and served as the company's primary public figure for nearly a decade, is stepping down to assume the role of executive chairman and will help manage business and government relations. Google's other co-founder, Sergey Brin, will focus efforts on unannounced new products.

The startling announcement was made in Google's quarterly earnings report (and informally on Schmidt's Twitter feed), in which the company reported revenue growth.

Google CEO: What we know about our users
RELATED TOPICS

Google offered no clear explanation for the executive shakeup, although Schmidt, in a Google blog post, wrote, "Larry, Sergey and I have been talking for a long time about how best to simplify our management structure and speed up decision making."

Observers, however, offered some theories.

In the way that HP's move might help people forget about the fumbling of former CEO Mark Hurd's ouster, Google's change could be designed to erase memories of some awkward statements made recently by its outgoing CEO.

Schmidt's public image took some hits after a string of verbal gaffes.

He also drew criticism for a CNBC interview in which Schmidt seemed to dismiss the importance of privacy, saying, "If you have something that you don't want anyone to know, maybe you shouldn't be doing it in the first place."

"Last year wasn't a great year for Eric," said Danny Sullivan, an expert in the online search industry who runs the blog Search Engine Land. "He's had a number of gaffes he's chalked up to things being out of context and jokes taken the wrong way.

"Schmidt has to carry all of these past statements along with him no matter what he does," Sullivan said.

A writer for the Business Review Canada magazine came to a similar conclusion.

Fortune's Copeland suggested the management changes are being made to alleviate tensions between Schmidt and Google's two co-founders.

"Eric's point of view didn't necessarily jibe with theirs all the time, and that's where the friction arose -- in China, in privacy matters in Europe," he said. "You got the sense that Larry and Sergey had one side and Eric had the other. Maybe Larry and Sergey, they just wanted to run the show themselves."

Page, who will turn 38 about a week before taking over, invented the original formula for Google's effective and secret online search algorithm while studying at Stanford University. Called PageRank, it employs computer robots to crawl the Web for clues in content that can signal how websites are connected.

The often-outspoken Brin, his former Stanford colleague and longtime business partner, will focus efforts on unannounced new products. During Thursday's conference call, Brin was brimming with excitement about these projects and boasted about his success so far in keeping things under wraps.

Schmidt has served as a sort of father figure in business to the pair of younger visionaries who developed the search engine. He is credited with pushing Google into new territories and helping to drive the moneymaking side of the business, elevating Google to be the world's largest online advertiser.

Google's Android operating system for mobile devices has been a huge hit, adopted by many smartphone and tablet manufacturers. But the company's attempts at launching social-networking tools, Google Buzz and Google Wave, never caught on.

Schmidt also is said to have spearheaded Google's controversial move into China, where it launched a search engine in 2006. But after China asked Google to censor search results for sensitive topics, such as Tibet, the company pulled out most of its operations there last year.

"Larry and Sergey and I have spent a lot of time talking about how to run everything," Schmidt said on Thursday's earnings call. "We think that this will produce even better success for the corporation."

The move will be a public-relations gamble, with Google playing what is essentially a wild card, observers say.

Being product focused and seen as a technology innovator may be more desirable traits for a leader than having a business-centric persona. Schmidt, who has joked about being an "adult supervisor" to his less-experienced colleagues, is widely seen more as a businessman than a tech visionary.

Unlike Schmidt, Apple's Jobs is seen as an inspired designer and a compelling presenter of new products. And like Page, Facebook CEO Mark Zuckerberg developed the company's original product and has struggled to overcome an awkward public presence.

"I believe Larry is ready," Schmidt said in the conference call. "I'm sure he'll do a fantastic job."

Page's search expertise and vision will be important for maintaining Google's outsize business.

"The search pillar represents Google's cash cow," wrote Vincent Letang in a report on Tuesday for research firm IHS. Letang was not immediately available to elaborate on his findings.

Meanwhile, Microsoft continues to nip at Google's heels with Bing, its search engine, which has been gradually gaining market share.

On the earnings call, Schmidt fielded most questions early on and then delegated time to Page and Brin in what seemed to show that he's still a key intermediary between the two. Schmidt will continue to advise the pair.