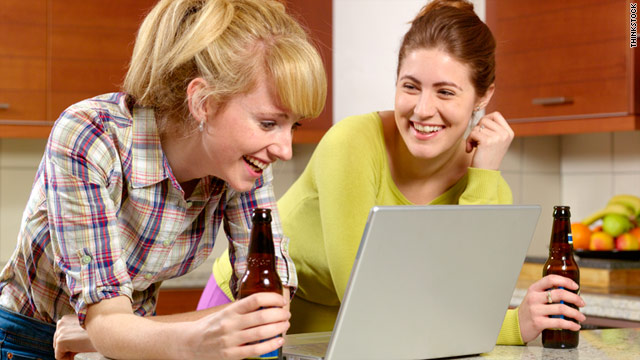 The percentage of adults who use social media continues to grow, and young women are leading the way, Pew says.
STORY HIGHLIGHTS
RELATED TOPICS

The percentage of Internet users who are on social-networking sites continues to climb, according to a survey released Friday by the Pew Internet & American Life Project.

This year's Pew report also marks the first time that more than 50% of adults surveyed (Web users and nonusers) use social networking.

About 89% of online women from 18-29 years old are on the sites and 69% of them say they tend to log onto social media every day.

Overall, 69% of women on the Web said they use social networking, compared to 60% of all men.

Pew said women have been "significantly more likely" to be on social sites than men since 2009.

Only search engines and e-mail remained more popular than social media among Web users, according to the survey

In one question, Pew asked people who have used social-networking to give a one-word description of their experiences.

The responses were overwhelmingly positive, the report said, with one-in-five being negative.

Among positive responses, the top five were: good, fun, great, interesting and convenient.

The most popular negative responses were: boring, confusing, frustrating, time-consuming and overwhelming.

We're particularly fond, however, of Pew's list of words that were only mentioned once in a survey of well over 2,000 people.

The findings are from a phone survey of 2,277 adults conducted in English and Spanish between April 26 and May 22 . The margin of error among Internet users is +/-3.7 percentage points