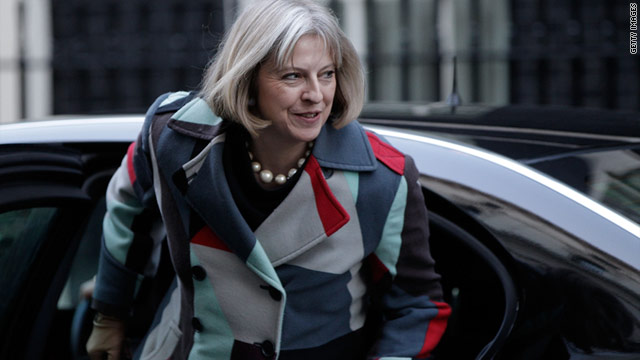 London (CNN) -- British Home Secretary Theresa May sat down with officials from the social media industry Thursday, her office said, as the government considers trying to ban people from social networking during or after crises.

But the government "did not seek any additional powers to close down social media networks," the Home Office said.

Twitter, Facebook, and BlackBerry maker Research in Motion all declined to say beforehand what position they would take at the meeting.

Top police officers and other government officials were also present for the meeting, which follows riots that swept England earlier this month.

Prime Minister David Cameron suggested limits on social networking in the wake of the unrest.

He told Parliament August 11 that "when people are using social media for violence, we need to stop them."

Thursday's meeting was about "whether and how we should be able to stop people communicating via these websites and services when we know they are plotting violence, disorder and criminality," the Home Office said in a statement prior to the discussion.

"Social networking is not a cause of the recent disturbances but a means of enabling criminals to communicate," it said.

"We are working with the police to see what action can be taken to prevent access to those services by customers identified as perpetrators of disorder or other criminal action," the ministry said.

Police and politicians have pointed to social networking sites, such as Twitter and Facebook, as well as mobile messaging services like BlackBerry's, as tools used to organize looting and violence.

Two men have been sent to prison for posts on Facebook urging people to riot in northwest England.

Cheshire Police named them as Jordan Blackshaw, 20, and Perry Sutcliffe-Keenan, 22, when they were sentenced last week.

Neither of their Facebook posts resulted in any rioting, a Cheshire Police spokeswoman said.

In handing down the sentence at Chester Crown Court, Judge Elgan Edwards said he hoped the sentence would serve as a deterrent to others.

Cheshire Police Assistant Chief Constable Phil Thompson said "technology was used to spread incitement and bring people together to commit acts of criminality," making it "easy to understand the four-year sentences that were handed down in court."

The unrest, which was sparked by the shooting of a man in London August 6, led to widespread looting and damage. Five deaths have been linked to the violence.

The Association of Chief Police Offices sent a representative to Thursday's meeting, it confirmed, but declined to give any other details, saying it was a private meeting.

The group has not taken a position on whether people should be barred from social networking.

London's Metropolitan Police also declined to say what its position would be at the meeting.

CNN's Andrew Carey and David Wilkinson contributed to this report.