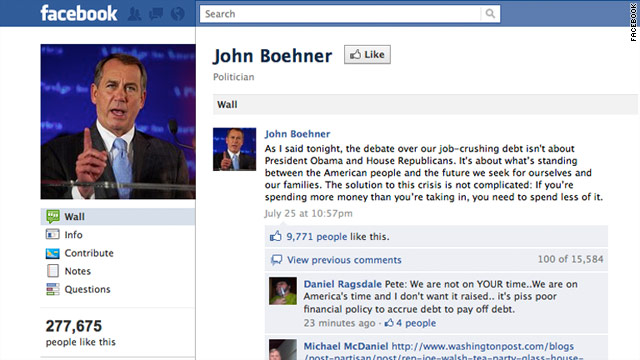 All House Speaker John Boehner's Facebook posts in the past two weeks have articulated his positions on the debt crisis.
STORY HIGHLIGHTS
RELATED TOPICS

(CNN) -- As members of Congress navigate the shifting political sands of the debt-ceiling crisis, many of them are turning to a digital platform more associated with sharing personal updates and funny videos about cats: Facebook.

"Over the past week, our team has seen a marked increase in the number of members of Congress speaking directly to constituents through their official Facebook pages," said Andrew Noyes, manager of public policy communications for Facebook.

The number of posts including video or radio snippets also has increased over the past week as lawmakers seek to engage their followers in new ways, Noyes added. As more members speak in front of C-SPAN's cameras, he said, "we fully expect to see the pace of these postings pick up."

All of House Speaker John Boehner's Facebook posts in the past two weeks have articulated his positions on the debt crisis. It's not clear whether they're nudging the needle of public opinion, but they are sparking dialogue: A message by Boehner on Monday drew more than 15,000 comments.

Observers say politicians have embraced social media platforms such as Facebook and Twitter because they allow them to communicate directly with constituents without having their messages altered.

"You can convey emotion in a Facebook update or a YouTube video. It offers an authenticity," said Brad Fitch, president of the Congressional Management Foundation, a nonpartisan group dedicated to improving citizen engagement with Congress.

"They [lawmakers] aren't letting the dialogue be created by someone else. They're creating the dialogue," Fitch said. "And they are very excited about avoiding the pesky media."

You can convey emotion in a Facebook update or a YouTube video. It offers an authenticity.
--Brad Fitch

Some members of Congress are addicted to the instantaneous feedback they receive on Facebook and Twitter, Fitch said.

"Politicians long for public reaction, and they long to be loved," he said.

Members of Congress also use Facebook and Twitter to quickly rebut published reports or opponents' claims they disagree with.

One challenge of communicating through unfiltered social media -- especially on hot-button political issues -- is that comments can degenerate into name-calling or worse. On Friday Rep. Bobby Schilling, R-Illinois, had to remind his Facebook fans that profane, threatening or inappropriate comments would be deleted.

So does all this social-media messaging by Congress really influence public opinion?

Probably not, says Nick Judd, assistant editor of the Personal Democracy Forum, a website about the intersection of politics and technology.

"It seems that while the population of Americans on social media is large and growing, folks who talk politics on social media are already polarized. You could think of it a little bit like being at a large party where the political junkies are huddled up in a back corner, talking amongst themselves," he said.

"How much gets from that group to their apolitical friends, I don't know -- but one prevailing theory now is that Facebook in particular makes it hard to breach that barrier." Judd cited a recent book, Eli Pariser's "The Filter Bubble," which argues that Facebook tends to surround users with like-minded friends and shield them from opposing views.

That's not stopping politicians from turning to the social network to get their message out. A recent survey of congressional staffers by the Congressional Management Foundation found that nearly 75% think Facebook is "somewhat or very important" for communicating their members' views, followed closely by YouTube and less so by Twitter.

"Facebook has become a critical channel for government communication," Noyes said. "Politicians are only getting more creative with social media as the the debate over the debt ceiling and other crucial public-policy issues continue."