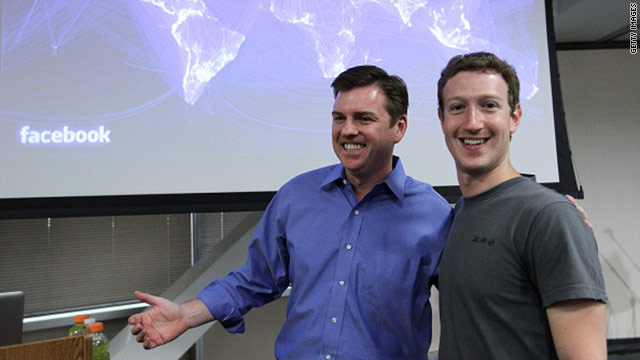 Skype CEO Tony Bates, left, says he considers his alliance with Facebook as "the most important strategic relationship."
STORY HIGHLIGHTS

(CNN) -- At one point during Facebook's "something awesome" event on Wednesday, more than 60,000 people were simultaneously tuned online to an unassuming meeting room at the company's headquarters to watch Mark Zuckerberg and cohorts unveil a slew of new features for the social-networking site.

While that might not be quite on the level of a Steve Jobs keynote, it's impressive given the relative regularity of Facebook product launches and the lack of suspense surrounding the day's announcements (we've known Skype video chat was coming for nearly a week).

The ever-growing ubiquity of Facebook was certainly a focal point of Zuckerberg's remarks. He confirmed the company now has more than 750 million active users and shared a personal anecdote about an elderly neighbor conversing with him on Wednesday morning about the event and his desire for video chat.

Certainly, a sense that Facebook has "won" the social network battle seemed to permeate, with Zuckerberg saying that the era of connecting people -- forming the underlying social graph that makes Facebook work -- "is more or less done at this point."

It's with that backdrop that we learned -- or at least confirmed -- several things about Facebook and where it currently sees itself in the technology world.

In fact, the first question Zuckerberg faced in the Q&A was about this week's hottest feature within the early-adopter set -- the "Hangouts" option in the new Google+ that lets you video chat with up to 10 people at once -- and why Facebook has no group-calling option.

The Facebook CEO pointed out that most Skype users simply use the one-on-one chat (though it would seem group video calling is on the product roadmap, eventually).

Facebook engineer Philip Su added in a blog post: "Video chat has been around for years now, but it's still not an everyday activity for most people ... sometimes it's too difficult to set up, or the friends you want to talk to are on different services."

Of course, most everyone you want to talk to is on Facebook (Google+, barely a week old, is still invite-only). Delivering reliable one-on-one video chat is all that most of these people need to spend even more time on Facebook.

In Zuckerberg's words, Facebook sees itself as the social "infrastructure" of the Web. It sees the biggest innovation coming not from inside its own walls, but from others that build apps that leverage that infrastructure.

Skype's video calling is a good example of that, and in the months ahead, you can expect most big new Facebook innovations to involve notable third parties.

Zuckerberg mentioned Netflix -- which is working to add deep Facebook integration to its service -- as an example. Spotify, which is finally coming to the United States and is rumored to be developing a music service with Facebook, would be another.

It wasn't lost on anyone that Skype's new owner (pending regulatory approval) is Microsoft, which also owns a stake in Facebook, powers its search and search advertising and is a key partner on numerous other products.

Mind you, Facebook began working with Skype long before Microsoft acquired it, but the deal brings the Palo Alto and Redmond-based companies closer together than ever before.

Skype CEO Tony Bates added at the press conference: "The day we announced, we definitely came to see Mark. It was for both of us -- Steve (Ballmer) and I -- the most important strategic relationship."

Considering the range of Microsoft products that integrate or plan to integrate Facebook and/or Skype -- which include Office, Bing, Xbox Live and Windows Phone -- the duo are aligned in competition against Google in virtually every key product category.

They're not scared of Google+

"Validation" is a word that often gets thrown around as a defense mechanism when a huge company suddenly starts competing with you, and that's the word Zuckerberg used when responding to a question about Google+, the search giant's new social networking service.

"I view a lot of this as validation as to how the next five years are going to play out," he said.

Those next five years, as Zuckerberg had previously made clear, will be all about building on top of the social infrastructure that Facebook has already created.

In that sense, Google+ could be viewed as validation in the sense that Google is now trying to recreate that infrastructure on its own turf. But Facebook, given its views on video chat and where future innovation will come from, seems to be confident that it has already won.

That's not to say that Facebook won't watch Google+ incredibly closely -- the company quickly blocked a tool that made it easy to import your Facebook contacts into the upstart social network.

One could argue that Facebook's "something awesome" event was rushed in response to Google+. Had it occurred a couple months later, we might have seen features like group video chat.

That said, it was mobile that seemed like the biggest omission from Wednesday's event, considering that both iOS and Android devices now support Skype video calling and Facebook already has hundreds of millions of mobile users.

The lack of any new mobile features -- other than some of the new group text chat options introduced -- suggests that Facebook remains focused on the desktop first.

The company's continued lack of an iPad app (though they will reportedly launch one this month) furthers this notion. Add to that a lack of mobile APIs that enable developers to build the robust applications Zuckerberg sees emerging on the desktop, and you have a company that seems to be playing catch-up in mobile when it has an opportunity to set the agenda.

While its launch events may not inspire post-Steve Jobs keynote-like wonderment about the future of technology, they do tell us how tens of millions of people are going to interact in the years ahead.