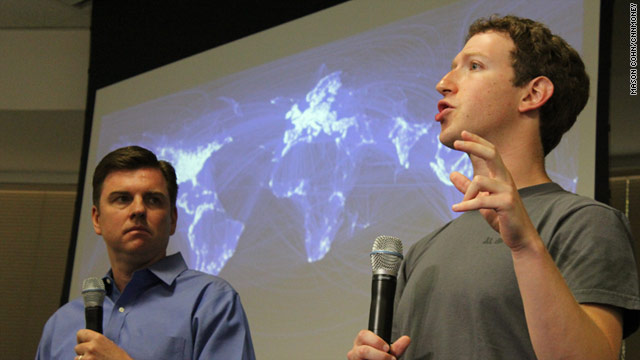 Palo Alto, California (CNN) -- Facebook is encouraging its members to talk face to face -- over the computer.

The social networking giant introduced a video-calling feature on Wednesday in partnership with Skype, the popular Internet video-chat provider.

The product comes a week after Google launched a competing social network, called Google+, which also includes a video-chatting program.

Facebook's version will show up on the site as a "call" button at the top of users' profile pages. By clicking that or finding someone in a new "buddy list" bar on the right-hand side, Facebook users can talk to each other as long as they have webcams. The company began turning that service on for millions of users on Wednesday and will add it to more accounts over time, spokespeople said.

This is "the world's easiest one-click way" to chat over video, Facebook engineer Philip Su said at the news conference here. The Seattle programmer was Facebook's only full-time engineer working on its development along with Skype, a Facebook spokeswoman said.

Facebook on Wednesday also introduced a change to its instant-messaging service, which now allows people to create on-the-fly group conversations.

"This is their response to Google+ right now," said Ray Valdes, an Internet analyst at Gartner Research. "I think it's a little bit of catchup in terms of features."

Google bills its new network as a better way to communicate certain messages to subsections of friends. Google+ also has drawn praise for its ability, with a service called Hangouts, to let users video chat with several friends at a time.

Facebook's new video feature does not allow for group chats. However, Skype CEO Tony Bates noted that the union with Facebook leaves an opening to add new features later, such as group calling or paid features like calling to landlines.

What Facebook does have, however, is 750 million people actively using its service, said Mark Zuckerberg, the company's CEO. Google+ is nary a week old and only available to people who managed to procure an invite from a member of the media or a tech-savvy friend.

"If you think about it, it makes it so that your networking community can do the work of organizing your communities for you," Zuckerberg said of Facebook's grouping features. "You don't have to curate."

He described Google as part of a group of companies, which also includes video-streaming provider Netflix, that haven't traditionally integrated social networking into their software.

Google's do-it-alone approach to social networking -- as opposed to one that integrates with other tech companies -- is poised to fail, Zuckerberg said.

"We're doing this with Skype, and I think that this is kind of symbolic," Zuckerberg said. "Entrepreneurs who focus on a specific type of thing will always do better than a company trying to do a million things."

Skype, the Luxembourg communications firm, is in the process of being acquired by Microsoft, a longtime Facebook partner. The day Microsoft announced its intentions, Skype executives met with Zuckerberg and his team, Bates said. Their talks had been going on long before then, however, and the Skype desktop software already integrates some of Facebook's utilities.

Defending the decision not to offer multi-person video-chat sessions like in Google+, Zuckerberg said: "The vast majority of video chat is one-on-one chat."

"I wouldn't rule anything out," he added. "But I wouldn't undersell the importance of what we're rolling out today."

In their presentation, Facebook engineers and Zuckerberg emphasized the simplicity of placing a video call. However, like with most video-chat services, users will need to install a plugin before they can use it.

Zuckerberg may have ginned up unrealistic expectations for Wednesday's event when he told reporters last week that the company would be announcing "something awesome." Some people following along on news sites' live blogs said they were underwhelmed by the news.

Overheard on CNN.com: Is Facebook's video chat awesome or yawn-some?