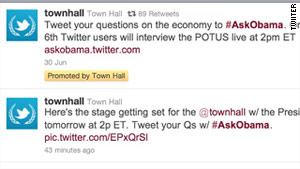 (CNN) -- President Barack Obama will answer questions about the economy and jobs Wednesday during his first Twitter town hall meeting.

But the president, known for his oft- lengthy responses to the shortest of questions, will not be confined to Twitter's 140-character limit. He is verbally answering questions from Twitter users, who were urged to use the hashtag #AskObama.

With the exception of questions coming from Twitter users -- known as tweeps -- the East Room town hall event will be like many the president has done before: fielding select questions conveyed via new media technologies while giving "old-fashioned" answers with a microphone.

White House officials have said the so-called "Tweetup" is a fresh opportunity for the president to engage with Americans beyond the Beltway.

The event will feature an audience of about 140 individuals who follow the White House Twitter feed and signed up for a chance to attend. The 140 is not a coincidence -- it's the number of characters allowed in a tweet.

Twitter co-founder Jack Dorsey will monitor the expected flood streaming in through the official #AskObama hashtag.

Obama: Govt must 'live within its means'
RELATED TOPICS

"Questions addressed during the town hall will be selected both in advance and in real-time during the event," Twitter said in a statement.

Obama held a similar town hall at Facebook headquarters in Palo Alto, California, in April and a YouTube town hall at the White House in February.

At both events, the White House was criticized for ignoring the subject that drew by far the most queries: whether he supports legalizing marijuana.

Though the president rarely tweets himself, the administration has increasingly used social media to bypass traditional media outlets and convey information directly to supporters.