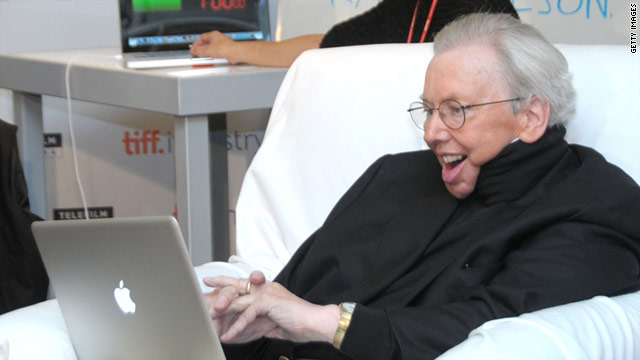 (CNN) -- It's been a scrappy day on social media for Roger Ebert.

Ebert, arguably the most well-known movie critic in the world, spent Monday and early Tuesday mixing it up on Twitter and Facebook on two fronts -- dialogues that apparently led to his Facebook page being temporarily deleted.

On Monday, Ebert implied that alcohol was involved in the death of "Jackass" star Ryan Dunn, who was killed in a high-speed car wreck early that morning. Earlier, Ebert referred to a Facebook group as a "lynch mob" for criticizing a Canadian Olympic hopeful allegedly caught lighting fires during recent riots in Vancouver, Canada.

Both, predictably, drew some criticism to the always pugnacious critic, who has taken voraciously to social media since becoming unable to speak unassisted after surgery for jaw cancer in 2006.

On Tuesday morning, Ebert tweeted that his Facebook page had been deleted "in response, apparently, to malicious complaints from one or two jerks."

His page, which has more than 57,000 fans, had been restored by mid-morning Tuesday.

"The page was was removed in error," Facebook spokesman Andrew Noyes told CNN. "We apologize for the inconvenience."

Noyes did not specify what led to the page being deleted, but Facebook provides a link to allow users to report pages for issues ranging from spam to hate speech.

On Monday, Ebert posted to Twitter an "R.I.P." message for Dunn and a link to an article about the Pennsylvania crash, in which Dunn's Porsche flew over a guardrail, hit a tree and caught on fire. A passenger in Dunn's car also died.

Ebert followed it with this tweet: "Friends don't let jackasses drink and drive."

Dunn had posted a photo on his own Twitter account about two hours before the crash that appeared to show him drinking alcohol with two companions in a nearby bar. That photo has been removed from his account.

"I must say, you're the biggest a--hole alive," one Facebook user wrote on Ebert's page in a comment that wasn't the harshest or most profane. "I dont care who you think you are but dont make fun of someone's sudden/tragic death! A son, friend, idol and loved one was lost. How dare you Ebert!"

" ... There's no reason -- especially RIGHT NOW -- that anyone should be pointing fingers or poking fun at a truly tragic situation," he wrote.

Bam Margera, Dunn's "Jackass" castmate, lashed out with a pair of obscene tweets of his own.

"I just lost my best friend, I have been crying hysterical for a full day and piece of s--- roger ebert has the gall to put in his 2 cents (about) a jackass drunk driving," he wrote. "F--- you! Millions of people are crying right now, shut your fat f---ing mouth!"

"Perez Hilton's readers agree with me and not with Perez about my tweet on Ryan Dunn," Ebert wrote. "He drank, he drove, 2 people died."

Authorities have yet to determine whether alcohol played a factor in Dunn's crash.

Tuesday afternoon, on his blog, Ebert expanded on his thoughts. While he didn't quite apologize, he suggested he should have waited to comment.

"I don't know what happened in this case, and I was probably too quick to tweet," Ebert wrote. "That was unseemly.

"I do know that nobody has any business driving on a public highway at 110 mph, as some estimated -- or fast enough, anyway, to leave a highway and fly through 40 yards of trees before crashing."

Ebert referenced what he called a "touching interview" NBC conducted with Margera's mother, who said she constantly urged Dunn to drive slower.

"She was being Ryan's friend," he wrote. "Friends don't let friends drink and drive."

Earlier Monday, Ebert had tweeted about a Facebook page devoted to banning Canadian water-polo player Nathan Kotylak from the country's Olympic team after he apparently started fires during rioting in Vancouver last week.

A video showed 17-year-old Kotylak trying to set a police car on fire after the riots, spurred by the Vancouver Canucks loss in the National Hockey League finals. He has apologized, calling his actions dumb and saying he was caught up in the moment.

The Facebook page, "100,000 Strong to Ban Nathan Kotylak From the Canadian Olympic Team," is full of harsh criticism for Kotylak and, apparently, included threats of violence against him that, according to newer comments, have been deleted.

"Canadians also have lynch mobs," Ebert wrote. "Facebook brings out the worst in those good people."

Shelly Comeon, the creator of the group -- which had a meager 771 members Tuesday morning -- said the intent wasn't to attack the young star.

"Roger Ebert is entitled to his opinion," Comeon told Canada's Examiner. "but from the onset of this group, I have maintained that mob-like mentality, threats or even posting of private information will not be tolerated."

Ebert again took to Twitter to defend and clarify, saying he, too, is against Kolyak's actions.

"O Canada! I wasn't defending Nathan. I was recoiling from some of the venomous remarks on the Facebook page," he wrote.

Ebert, the first film critic to win a Pulitzer Prize for criticism, is no stranger to online feuding.

And last year, he raised the ire of video-game fans by writing that the games will never be art. Ebert later backtracked somewhat, saying he should have reserved comment because he hadn't seen many games.

Earlier this year, he apologized for using "the n-word" in a tweet complaining about a new version of Mark Twain's "The Adventures of Huckleberry Finn" that removes 219 instances of the word. (For what it's worth, Ebert's wife is black).

The Chicago Sun-Times critic also has been vocally political on Twitter, frequently going after Sarah Palin, the Tea Party and others.