President Obama to start tweeting himself 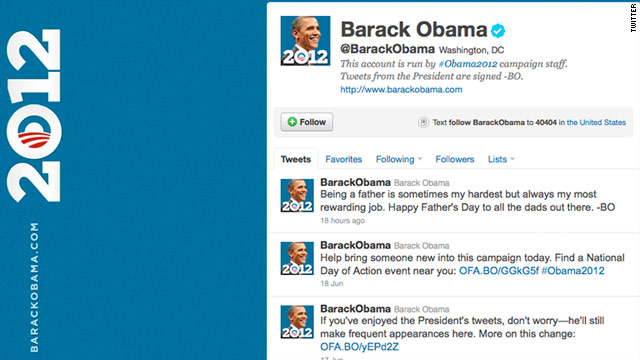 Personal tweets from "-B.O." himself will probably do a lot to drum up enthusiasm (not to mention retweets) from supporters.
STORY HIGHLIGHTS
RELATED TOPICS

In an update Saturday, it was announced that the President's re-election staff would be managing his social media presence and accounts on Facebook and Twitter.

A rep also revealed that the Commander In Chief would be penning tweets of his own and that "on Twitter, tweets from the President will be signed '-BO.'"

The @BarackObama account has been active since 2007, when Obama was using social media in his campaign for the presidency.

However, as the account began accumulating updates in 2009, we discovered that the President's staff, not the President himself, was actually posting the tweets.

In a visit to Shanghai, Obama told a group of Chinese students, "I have never used Twitter. My thumbs are too clumsy to type in things on the phone."

In fact, the President did not himself send a tweet until the beginning of 2010, when he pushed the button in support of the @RedCross account.

With Republican candidates' early use of social media in the 2012 race, Obama's staffers are strengthening an already robust social media program for the President's campaign.

In all likelihood, personal tweets from "-B.O." himself will do a lot to drum up enthusiasm (not to mention retweets) from supporters.