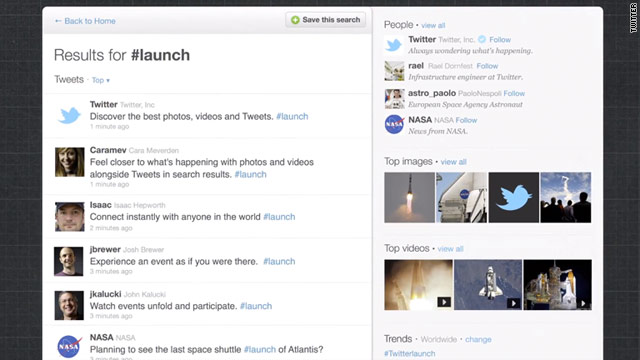 Twitter's photo feature coincides with changes to its search function, which will now pull in popular photos and videos.
STORY HIGHLIGHTS
RELATED TOPICS

The social network is rolling out an image-hosting feature to users over the next couple of weeks, CEO Dick Costolo announced Wednesday at the All Things Digital conference here.

Users will be able to upload photos through Twitter's website to start, with desktop and mobile applications coming later, Costolo said.

To construct the service's backbone, Twitter partnered with Photobucket, which already hosts more than 8 billion photos and videos. The Twitter service will accept only still images.

"Photobucket is excited to be chosen to power this extension of Twitter," Photobucket CEO Tom Munro said in an e-mailed statement. "We are confident that together we can seamlessly provide a simple, intuitive photo sharing experience for Twitter users"

The new photo feature coincides with changes to Twitter's search function. Results pages will now include popular photos and videos alongside text. The videos will be pulled from websites such as YouTube and Vimeo.

Several third-party photo services, such as Twitpic and Yfrog, have specifically targeted Twitter users. Costolo said Twitter created its own service to make the process easier for less tech-savvy people.

"We just need to remove the friction from adding photos into Twitter," he said.

But Twitter's recent moves to compete with the companies that build products for its service has created some ill will. Developers say they feel uneasy about Twitter acquiring makers of related software, such as TweetDeck, and then threatening to change the rules so as to potentially lock out certain types of apps.

"Anything we do is going to have some overlap with what they do," Costolo said of Twitter's 600,000 developers. "All we can do is be straightforward about where we're headed."

Costolo suggested that software makers displaced by Twitter's new photo service should focus on other businesses. Yfrog, for example, has "an amazing hosting business," he said.

Twitpic, a popular Twitter image-hosting website, has come under some scrutiny for selling the rights to photos uploaded by some of its users. Twitter's policy outlines that the company will not try to claim ownership of images uploaded to the service, Costolo said.

He also said Twitter's foray into photo sharing is not aimed at Facebook, the world's largest host of online photos. Twitter's is about sharing pictures as they happen and will not let users arrange images into photo albums, he said.

Twitter has 500 employees, but Costolo declined to say how many people actively use its service. Facebook, meanwhile, has about four times as many employees and more than 600 million active users.

A survey competed this month by the Pew Research Center says 13% of U.S. adults with Web access use Twitter.