Blippy loses one of its biggest fans 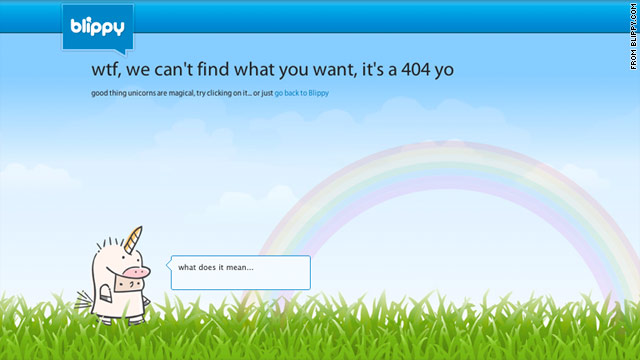 Blippy, the site that lets users automatically share their credit card purchases, has lost much of its steam.
STORY HIGHLIGHTS
RELATED TOPICS

(CNN) -- At the end of 2010, I wrote a story about Louis Gray, a Silicon Valley blogger who is comfortable sharing pretty much everything about his life on the Internet.

Gray had become one of the tech world's most public advocates for a site called Blippy, which lets people automatically post all of their credit card transactions online. He put everything on there -- even his wife's rental of a breast milk pump ($109.25 per month).

Too bad for Blippy, because Gray recently abandoned the site.

"I loved the idea of Blippy, and learning from what people were actually purchasing, not just what they said they 'liked' or where they 'checked in,'" he wrote in an e-mail to CNN after posting about the decision on Twitter. "I fully support that process and quickly put as much information in as I could. What I found, however, was that the actual use of Blippy was sporadic. It took a great deal of time to update individual entries to add them to my stream, and interaction from the community was slim. So it was a lot in and not a lot out."

This decision, while it may seem isolated, is confirming suspicions in the tech world that Blippy is losing steam after getting tons of initial press and buzz. The edgy idea captured both interest and outrage, as some privacy advocates and run-of-the-mill people though it was ridiculous and dangerous for people to share their credit card statements online -- and others said Blippy's concept was the next logical step in the evolution of our online, share-everything culture.

It also doesn't help that Philip Kaplan, once a Blippy co-founder and its public face, left the start-up in March, according to news reports.

On the popular blog TechCrunch, Alexia Tsotsis writes that the site's growth has stagnated, in part because no one cares what their friends are purchasing.

"So it turns out that almost nobody wants people to check out their purchases," she wrote. "And also that just adding a social element to a feature isn't enough to make it useful. The lessons of user adoption are sometimes learned the hard way."

Blippy co-founder Ashvin Kumar said in an e-mail to CNN that the site is planning to change directions:

"It is always sad to see great users like Louis leave, but at the end of the day we have to make the best decisions for our business. Blippy.com will continue to be maintained, but our resources as an organization are now focused in a new direction," he wrote.

"We're keeping our cards close to our chest for the time being, but we're continuing to iterate in the broad space of social commerce. We're taking our learnings from Blippy and applying them to our new projects. Most of our team has already shifted focus to working on these new projects."

He declined to elaborate and did not respond to questions about how many users the site has or how regularly people post to Blippy.

Gray isn't opposed to the idea of sharing data about all of the stuff he buys, but Blippy's community didn't make it fun to do that, he wrote.

"The lack of connection with people there made it less desirable for me as a destination, so in an effort to reduce my time keeping all my networks current, I pulled the plug."

Have you tried Blippy? If so, what do you think?