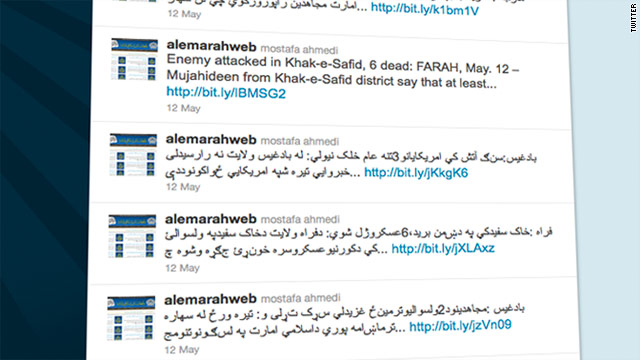 (CNN) -- The Taliban have long been known as haters of modern technology, certainly the kind that comes out of the Western world they revile.

Now, they're on Twitter, and as of this week, even tweeting in English.

The account, @alemarahweb, links back to the Taliban's website, Islamic Emirate of Afghanistan, which is the name they use for themselves.

Most of the tweets on the account, which was created on December 19, are written in Pashto, the native language in parts of Afghanistan.

As The Guardian, the UK publication, noted, the feed had fewer than 1,000 followers as of Thursday. The addition of English, as well as the media reports about it, have more than tripled that total to over 3,000 as of Friday morning.

The feed appears almost entirely made up of links to the Taliban website. The English-language posts appear to be wildly exaggerated claims of attacking and killing NATO and U.S. troops and Afghan government personnel.

If the tweets were to be believed, 81 "enemy" troops were killed since the feed began publishing in English on Thursday. A U.S. spy plane, and 23 vehicles, including five U.S. tanks, also were destroyed by Taliban attacks, according to the tweets.

Military and news reports do not support anything approaching those claims.

The account also appears to be used to keep an eye on those the Taliban considers enemies.

Of the 12 accounts it follows, several are news agencies covering the region. It also follows a charity to support British troops, a U.S. Air Force officer and, perhaps ominously, an Afghan government agency focused on education, entertainment and cultural programs for children.