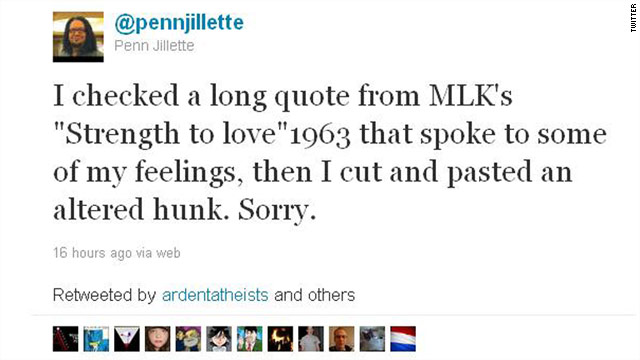 (CNN) -- As quotable American figures go, it's hard to top the Rev. Martin Luther King Jr. and Mark Twain. So, in the wake of the historic raid that killed terrorist leader Osama bin Laden, it's not surprising that both had quotes that were all over social media.

Just one problem: They never said either one of them.

The quote attributed to King, used by many to express discomfort with celebrations of bin Laden's death, ended up being a mashup of something he actually said with commentary an Internet user had written before quoting him.

"I mourn the loss of thousands of precious lives, but I will not rejoice in the death of one, not even an enemy. Returning hate for hate multiplies hate, adding deeper darkness to a night already devoid of stars. Darkness cannot drive out darkness: only light can do that. Hate cannot drive out hate: only love can do that."

Beginning with "Returning hate for hate ...," the last three sentences are in fact, a King quote from his book "Strength to Love." But the first sentence, and arguably the one most pointedly apropos to the bin Laden aftermath, is not.

Twitter user Jessica Dovey later said the partial misquote originated with her. She posted a link to her Facebook page, on which it appears she wrote the first sentiment and followed it with the King language -- in quotation marks and followed by the attribution "MLK jr."

Apparently, one of her Facebook friends shared it and, from there, it went viral.

Its biggest boost appeared to come from entertainer Penn Jillette, who tweeted the incorrect quote to his 1.6 million followers. He would later correct it.

But not before the lightning-fast world of the Internet got wind of the misquote (in some cases from online articles that mistakenly blamed him for creating it) and used Twitter to hurl sometimes harsh criticism at him.

By Tuesday, as the confusion began to clear, Dovey appeared to be focused on the positive aspects of the misunderstanding.

"I am overwhelmed: my tiny voice has sparked meaningful, intelligent debate across the interwebs," she wrote on Twitter, following with the hashtag "#peace."

Dovey, who is an American teaching English in Kobe, Japan, also responded via e-mail to questions from CNN about the episode.

"I do know where the misattribution occured, and it was a simple case of an iPhone copy-paste gone wrong," wrote the 24-year-old. "It certainly wasn't intentional, and not anything to be upset over! The quotation marks have since found their way back home, and have caused a lot of uproar in the journey.

"Without that, I'm not sure anyone would still be talking about the quote," she added. "I am grateful for the mistake and for the useful discussion and hilarious un-quotes that have followed."

Another quote making the rounds Monday and Tuesday was attributed to Mark Twain, the author and legendary wit who, alongside William Shakespeare and the Bible, may be among the world's (and Internet's) most misquoted sources.

The quote certainly sounds like something Twain would have written or said: "I've never wished a man dead, but I have read some obituaries with great pleasure."

Matt Blum at Wired was among those who caught the misquote. A similar version actually came from Clarence Darrow, an American lawyer most known for his role in the Scopes Monkey Trial.

His quote: "I have never killed any one, but I have read some obituary notices with great satisfaction."

The quote may have gotten confused with another that's long been attributed to Twain: "I didn't attend the funeral, but I sent a nice letter saying I approved of it."