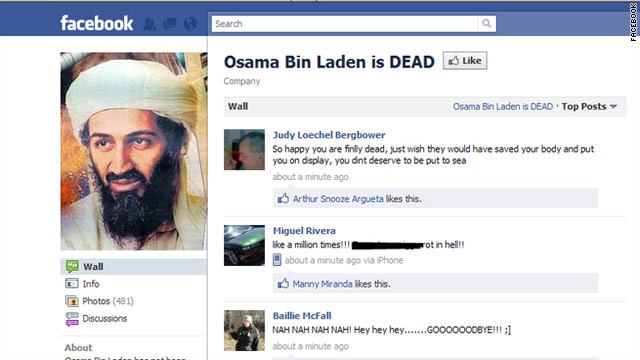 (Mashable) -- Within about two hours of reports first surfacing (and since confirmed by the President) that Osama Bin Laden had been killed, a Facebook Page titled "Osama Bin Laden is DEAD" has already accumulated more than 150,000 "likes."

The page appears to be adding thousands of likes by the minute with users also sharing hundreds of comments and links to stories about the news.

Interestingly, the page itself appears to have been setup well prior to tonight as a way to advocate the theory that Bin Laden had actually died long ago.

The page description reads in part: "Osama Bin Laden has not been found and will never be found because he died a long time ago. This may be news to you because it wasn't in the news. His death is critical to the CIA because they want you to believe in this so called 'War on terror' which has made the world a more dangerous place. If Osama Bin Laden was alive, he would've been found -- just like Saddam Hussein."

Nonetheless, the page is now serving as a real-time discussion board for the historic news.

See the original article at Mashable.com.