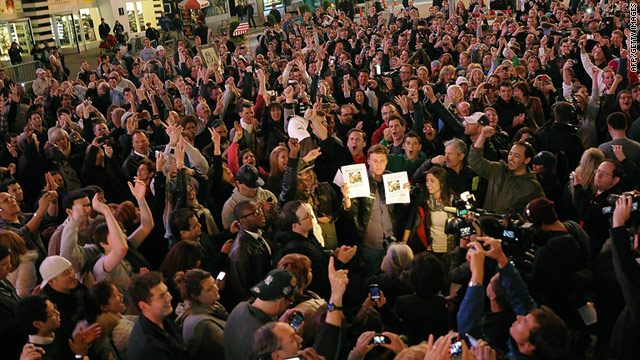 (CNN) -- It's already become one of those "where were you?" moments.

But for many plugged-in people who found out about Osama bin Laden's death Sunday night, the answer to that question is likely something a little different than usual:

America anxiously monitored that microblogging site Sunday as it waited for President Barack Obama to make an official announcement about the U.S.-ordered killing of the al Qaeda leader. Media analysts and observers said this is the mark of something significant -- a reminder that news, confirmed or not, is more instantly accessible now than ever before in history.

Whether Twitter "broke" the story of bin Laden's killing at a compound in Pakistan is up for debate; what's certain, though, is that the real-time Web shuttled this news around the globe at lightning speed.

Before Obama's televised speech at 11:30 p.m. ET, people on Twitter were not only aware of the news of bin Laden's death; they were already dissecting it, and some were asking why it was taking the president so long to say something.

"Okay Obama hurry up with the speech... #impatient," one Twitter user wrote, echoing a sentiment bouncing around that site.

Some observers said the first word of the news broke on Twitter.

A White House official tweeted at 9:30 p.m. ET that Obama would be making a presidential address one hour later.

Before that address could air, however, the chief of staff for former U.S. Defense Department Secretary Donald Rumsfeld gave legs to an already-spreading rumor:

An hour later, the same news came from the president:

"Tonight I can report to the American people and to the world that the United States has conducted an operation that has killed Osama bin Laden, the leader of al Qaeda," Obama said in his televised address.

Again, people rushed to the Internet to discuss this news. More than 4,000 tweets per second were posted during Obama's address, according to a Twitter spokesman, making that one of the highest-traffic conversations in that website's history.

On Monday morning, Urbahn, the former Defense Department spokesman, wrote that his tweet should not be read as the death of mainstream media, or MSM.

"My source was a connected network TV news producer. Stories about 'the death of MSM' because of my 'first' tweet are greatly exaggerated," he wrote.

Brian Stelter, a media writer for The New York Times, and many others, said that Urbahn's tweet added much credibility to already-swirling rumors.

"That speculation was not aired out on television immediately, but it did erupt on Twitter and other social networking sites. Wishful thinking about bin Laden's death ricocheted across the Web -- and then, at 10:25 p.m., while Mr. Obama was writing his speech, one particular tweet seemed to confirm it," he wrote.

Noelle Seybert, a 24-year-old in San Diego, California, was sitting in a bar with a friend when she decided to check her Facebook news feed from her smartphone, which she carries around like it's an "appendage."

She checked a mainstream news feed on Facebook to find out bin Laden had been killed -- and said the experience of finding out about a major event on Facebook was a bit jarring.

"It was harder to process this whole thing because I found out on Facebook," she said by phone on Monday. "I don't know, I just feel like it was too big of an event. I was like, 'Wait, what? Facebook told me this?'"

Online pundits rushed to comment on the role of social media in spreading the news, focusing particularly on Twitter, where it moved most rapidly.

"Twitter was faster, more accurate, and more entertaining than any other news source out there," Matt Rosoff wrote on the tech blog Silicon Alley Insider. "Which means the next time my dad asks me why anybody would use Twitter, I'll finally have a good response."

More cheers for this newer-faster medium came from The Atlantic:

"Twitter has once again proven its worth," wrote Nicholas Jackson. "It might not win wars or spark revolutions -- that's still being debated -- but its value is clear to those of us who watched their feeds fill with news and notes over the past hour. Newspapers might be dead or dying, but traditional ink-on-paper reporters were able to share this story much faster than cable news outlets by adapting to this technology."

At ZDNet, however, another tech blog, Larry Dignan says it's "downright silly" for the news media to call this a Twitter moment -- just like the Hudson River plane landing and the revolution in Egypt.

"Let's get real," he wrote. "(B)in Laden's death is a moment for all of those troops fighting in Afghanistan and Iraq. And it's justice for those families torn apart in the attacks on New York and Washington D.C. on that sunny morning September 11, 2001."

How did you find out about bin Laden's death? Let us know in the comments.