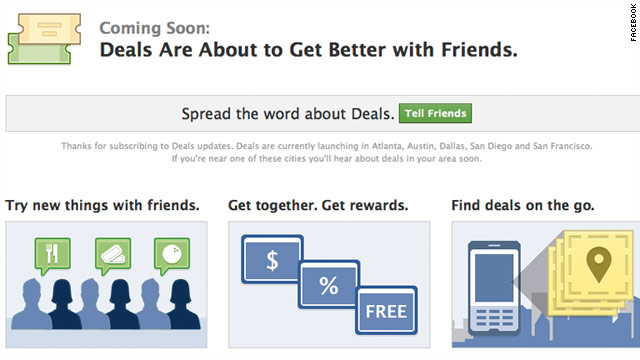 Local offers made to Deals users will be delivered via email and will also appear in users' news feeds.
STORY HIGHLIGHTS
RELATED TOPICS

(Mashable) -- Facebook is finally launching local Deals -- a feature that will compete with Groupon's core product, not Foursquare's -- in five cities today.

Facebook revealed to The New York Times that the local offers made to Deals users will be delivered via email and will also appear in users' news feeds.

Any Facebook user can sign up for Deals notifications on the feature's landing page now; users in the five test cities should be able to see and use Deals.

Mashable: We've got screenshots of the all-new Deals

Facebook's first local deals product was announced as part of Facebook's overarching locations feature, Places. Mobile check-ins were linked to deals; in this way, Deals served as an incentive for Facebook users to integrate Facebook Places in their daily lives -- and they were also an incentive for marketers and major brands to put more money into the Facebook platform.

Facebook even briefly launched a page to let web users find these checkin-focused deals on the web.

However, the new Deals are less like a Foursquare coupon awarded to the user after a checkin and more like a Groupon voucher, which means the user can buy a certificate for a certain good or service at a steep discount, typically half off its retail price, then redeem it later.

Examples of the new breed of Facebook Deals from brands include "unlimited bowling with six friends for an evening for $60 (75% off)" and "luxury winery tour and 25% off all wine purchases for $50."

Perhaps most importantly, users can buy Deals using Facebook Credits, paving a smooth path between a virtual currency and real-world goods and services.

We suspected Facebook had plans to bring Credits to the real world since around the time of f8, the company's developer conference, when Facebook announced its ambitious Open Graph.

Users are able to buy Deals with major credit cards.