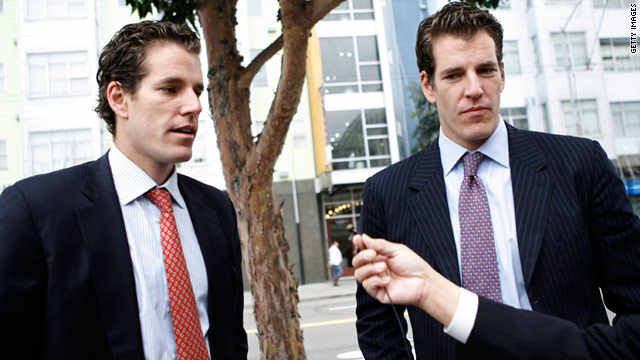 Cameron, left, and Tyler Winklevoss speak to reporters as they leave the U.S. Court of Appeals in San Francisco.
STORY HIGHLIGHTS

(Mashable) -- Cameron and Tyler Winklevoss must accept their $65 million settlement from Facebook and move on.

A U.S. appeals court ruled Monday that the settlement -- which was featured in the movie "The Social Network" -- still stands, despite the Winklevosses' claim that Facebook did not disclose an accurate valuation.

The suit stems from the Winklevosses' claim that Facebook co-founder and CEO Mark Zuckerberg stole their idea for the social-networking site.

Zuckerberg and Facebook deny the allegations, but agreed to settle in 2008. Since then, the Winklevoss twins have attempted to secure a higher settlement by claiming that Facebook is guilty of securities fraud.

"The Winklevosses are not the first parties bested by a competitor who then seek to gain through litigation what they were unable to achieve in the marketplace," Chief Judge Alex Kozinski wrote in today's ruling.

Where did idea of Facebook come from?
RELATED TOPICS

"And the courts might have obliged, had the Winklevosses not settled their dispute and signed a release of all claims against Facebook."

With both the district court and appeals court in agreement, it seems this may be the end of the Winklevosses' claim to any additional shares of Facebook.

"For whatever reason, they (the Winklevosses) now want to back out. Like the district court, we see no basis for allowing them to do so," Kozinski wrote. "At some point, litigation must come to an end. That point has now been reached."