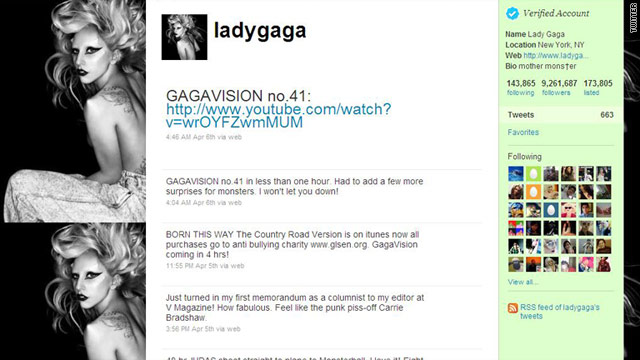 Right now Lady Gaga has over 9.2 million Twitter followers -- but there are other ways to measure influence on the site.
STORY HIGHLIGHTS
RELATED TOPICS

(CNN) -- Lots of Twitter users have lots of followers. For instance, according to Twitaholic right now Lady Gaga has over 9.2 million; Justin Bieber has over 8.6 million; and Britney Spears, over 7.3 million -- just slightly ahead of Barack Obama.

But new research published by the Association for the Advancement of Artificial Intelligence shows that simply having a large Twitter following isn't necessarily enough to make you especially influential.

On Twitter, how many re-tweets or mentions a user attracts over time also are important ways to measure influence.

This was a pretty big study. The international research team (here's the project site) examined nearly 55 million Twitter accounts that were in use in August 2009.

These users were connected to each other by 1.9 billion social links. Over 6 million of these users were considered "active" in that they'd posted more than 10 tweets and had a currently valid screen name. In all, over 1.7 billion tweets were analyzed -- all the tweets ever posted by the nearly 55 million users being studied.

The researchers examined three metrics of influence on Twitter: the number of followers, re-tweets, and mentions of Twitter users -- not direct re-tweets, but casual mentions.

Not surprisingly, the most-followed Twitter accounts belong to celebrities and major media brands. The most-mentioned accounts also tended to be celebrities.

But the most-re-tweeted accounts tend to be content aggregators, news sites, and business celebrities, such as Guy Kawasaki.

Looking at the top 100 users in each influence category yielded a list of 233 "all-time influentials." There are only 233 because there was overlap among these groups.

Some of these were news organizations, some were celebrities -- but others were fairly regular people. This list has not been released, but the researchers did note that the top-20 lists in each category only had two users in common: Ashton Kutcher and Puff Daddy.

Overall, only 7.1% of the all-time influentials were included in all three influence categories.

So how can you gain influence on Twitter? This research suggests that focusing your tweets mainly on one topic is a good way to start.

This focusing strategy can include serving as a topic curator by re-tweeting posts by others about your core topic. Keep an eye out for relevant hashtags -- keywords that start with "#", a convention people use to follow topics on Twitter rather than specific Twitter accounts -- and use the most popular relevant hashtags to attract wider attention to your contributions on the theme.

It helps to keep a topical focus over time, but when big news breaks that involves a place or topic you know a lot about, get ready to turn into a reporter. Stay glued to your computer to provide a steady curated stream of up-to-the minute updates. NPR's Andy Carvin has been demonstrating this approach in his much-noted Twitter coverage of the this year's revolutions in the Middle East and North Africa.

I did something similar in 2008 when a dam burst in Tennessee, dumping over 3 million cubic yards of coal ash from a huge power plant onto a nearby community. I launched the #coalash hashtag and stayed on the story by remote, tweeting and re-tweeting information as I found it. Yes, I'm a journalist -- but you don't need to have a press pass to play this role when news breaks about something you know well.

I picked up over 1,500 new Twitter followers in the days and weeks following that dam rupture. As the news subsided, many of those new followers stuck around, which to me indicates that being useful at a crucial time can translate into lasting influence -- at least on Twitter.