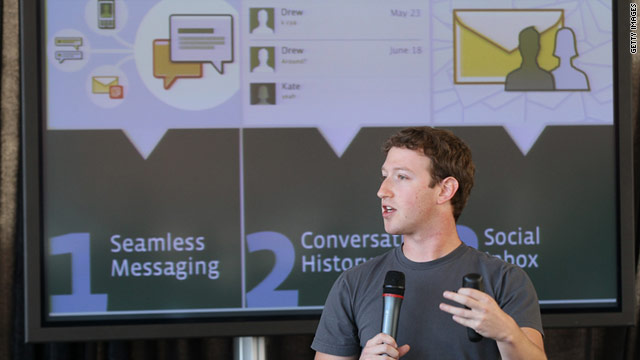 Palo Alto, California (CNN) -- The goal of Facebook's new messaging client is to simplify private communication, but as it turns out, executing that has been astoundingly complicated.

Facebook announced and began rolling out the new version of Messages in November, and even now, the company has yet to activate the feature for all of its more than 500 million users.

Reaching everyone could take several more weeks, said Andrew Bosworth, a Facebook director who oversees product development. At least one-fifth of all Facebook users now have access to the feature, and millions more are added daily, said people overseeing the release.

If Facebook engineers could have flipped a switch and activated the feature for every account simultaneously, Bosworth would have given the order without hesitation, he said.

But the new Messages entails more than just dropping the subject line from correspondences and giving everyone a chic @facebook.com e-mail address.

It's an amalgamation of very different communication media. Facebook's system needed to be able to connect with cellular carriers' networks for its text messaging component, operate on standard e-mail channels, and interface with instant-messaging conduits.

Once all that was figured out, Facebook developers went to work on promised features that will be added later. One such element is IMAP access, so that people can pull up their Facebook messages from software like Microsoft's Outlook.

For the Messages project, Facebook assembled a team that consists of 15 to 20 people at a given time, executives said. At the time, it was the largest product-focused group the company had ever formed, they said.

"This is probably one of the biggest undertakings we have ever taken on," said Joel Seligstein, a lead engineer on Messages.

The Messages team grew last month when Facebook acquired a fast-growing startup called Beluga, which makes a group-messaging service. Facebook will maintain development on Beluga for now and plans to integrate the information sent over the service into Messages within the next six months, Bosworth said.

With that purchase, Facebook has staked a claim in the up-and-coming mobile messaging arena. Managers are still deciding whether it makes sense to have a dedicated app for quickly sending messages in addition to the all-in-one Facebook software, Bosworth said.

"The fact that they're one click from the home screen is a valuable trait," Bosworth said of Beluga. "We see them as very consistent with what we've been doing -- real-time, shorter messages, more social, more contextualized. They've done a great job of taking that idea and doing something new and different with it."

In the years since Facebook first made a play to be your inbox, many new communications tools have appeared. Seligstein is the only developer involved in the new Messages who also worked on the original, which launched during Facebook's early days, he said. Based on discussions, he's often the one most critical of it.

"It had the wrong features," Seligstein said. "We were missing a lot of the communicating that was happening."

A lot of those shortcomings were conceptual, developers and executives said. Even the most minute components slowed the process of composing a message and needed rethinking, including having a subject line and the size of the text box. "People just naturally wanted to fill the box," Seligstein said.

So they took their cues from the rise of mobile and instant messaging. Facebook's chat feature, which is being integrated into Messages, is among the most used functions on the site, Bosworth said.

"It's not about establishing relationships. Relationships are assumed in this world," Bosworth said. "Our relationship is established. I don't need to say: 'Hope you are well; how's the kids?' ... If something is wrong with your kids, I'd know. I'd see it on Facebook."

Once those hoops vanished, Facebook observed that people using the new service were sending shorter messages and at a much higher frequency, Seligstein said. In essence, the design changes had morphed behavior, and that's no accident.

"We were expecting this to happen," Karthik Ranganathan, a senior engineer on the project, said flatly.

As the story goes, the impetus for redesigning Messages was a conversation between Facebook CEO Mark Zuckerberg and some high school girls during a Thanksgiving weekend, not long after the first version of Messages was released. "E-mail is too slow," Zuckerberg recalled them saying.

"That was probably the first time in his life that he felt like the old guy in the room," Bosworth, a longtime collaborator of Zuckerberg's, said with a laugh.

From that experience, Zuckerberg was determined to solve a problem he wasn't aware existed.

"We don't think that a modern messaging system is going to be e-mail," Zuckerberg said during the news conference last year. "We think that we should take features away from messaging. We think it should be minimal."

But in the time since cementing the concept and in the months since beginning the rollout with much fanfare, engineers have run into some monumental hurdles.

Amid the big launch, they were taking the opportunity to clean up their databases and build a smoother bedrock. One false step and countless messages could be lost. For that reason, they kept many backups and added new users carefully.

"The amount of infrastructure we had to build for this is huge," said Prashant Malik, a Facebook senior engineer. "There are many unknowns."

Beyond the technological feats, Messages can be seen as a gesture to open communication beyond the gates of Facebook.

Traditionally, the products Facebook has built are about sharing things among people you know and within the confines of Facebook's large network. The Facebook service, Bosworth said, "is friend-centric. But communication is bigger than that."

"We've discovered new, cool things that we can do with communication that we didn't know about six months ago," he said. "This is a classic Facebook thing, man. We always want to evolve."