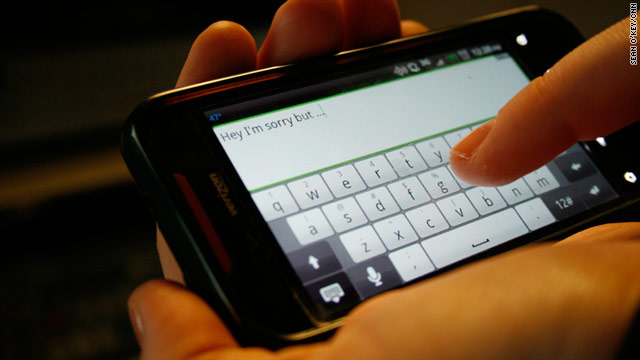 Being pursued online and want to be left alone? Assuming someone will just "take a hint" is flat-out rude. Be upfront.
STORY HIGHLIGHTS
RELATED TOPICS

(CNN) -- Fact: In this crazy game called life, you will encounter people with whom you won't want to engage.

Some of these people will not realize they annoy you, and as you do your best to avoid them in social situations and eradicate their existence from your hippocampus, they will loom ever larger in your life.

People are cowards. We don't like to deliver bad news or be the instigator of others' negative feelings -- even if, in shrinking back and twiddling our thumbs, we hurt others more in the process.

People are more comfortable letting bad things happen than actively causing them, likely because crimes of commission look worse to others, according to a new study in Psychological Science.

Online, it's especially easy to stick your fingers in your ears and let your passivity deliver bad news that you're too chicken to deliver yourself, because you don't need to actually see the poor blown-off chap on the other end of an ignored e-mail, text, etc.

But the truth is, growing some cajones and facing a this-will-not-end-well situation head-on is almost always more respectful to the other party than going into hiding.

It's also much easier on your guilt reflex -- cringe once and it's over vs. letting the whole situation weigh on your shoulders like poor Atlas crumpling under the globe.

With that in mind, we present to you three electronic-communication scenarios where avoidance may be your first instinct but proactivity is the better option.

The situation: Ten minutes into a date, it's quite obvious to you that you'll never go out with this person again.

After he shows you pictures of his kittens, brags about his 18-month unemployment and casually mentioned that he's high ("I forgot we had this tonight and smoked up with some people -- wait, is that a problem?"), you give him what you consider an icy shoulder-pat and fling yourself inside your door, locking it behind you.

Alas, obliviousness trumps all: Two days later, you get a text that reads, "Hey, I had a great time on Monday! Are you free for dinner Friday?"

Right response: Text him back within 24 hours. "It was so nice meeting you, but I'm honestly feeling more of a friend vibe. Thank you for the fun time, and good luck with everything!"

Assuming someone will just "take a hint" is flat-out rude. We've all been on the other side of unrequited like, and it sucks to feel excited about someone and then feel fading hope as the days pass without a response.

Yeah, a rejection text stings, too, but at least it clears things up so the wounded party can take a deep breath and move on -- continuing his infinite quest for The One who will simply adore those kitten snaps and that all-consuming narcissism.

Oh, and don't give some lame "I'm just not ready to date right now" line. This might instill hope and keep him pining after you ad infinitum, which is flattering but also cruel.

The situation: An eager-beaver college grad/job applicant/PR person e-mails you with an enthusiastic request for advice/an interview/your consideration of their client or product. You have zero time/openings/interest, respectively.

Right response: Again, crushing hopes is better than going into hiding for both your psyche and that of the requester.

Write back quickly and be polite but firm: "Thanks so much for your interest. Unfortunately, I won't be able to meet your request."

Yeah, said rejectee might scowl and cuss at you upon opening up the reply. But the swear words will be milder than those reserved for a business professional who just never responded despite multiple phone calls, e-mails and LinkedIn messages.

This hints at another don't: Don't keep buying yourself time with vague promises to follow up after a few weeks. If you tell someone to try again, they'll try again, and you'll just delay the inevitable and build up bad blood in the meantime.

The situation: A myriad of people you kinda vaguely know -- that formerly Goth girl from ninth grade, your ex's roommate, your mom's boss -- send you friend requests on Facebook. You don't want to be friends with any of them.

Rude (or at least pointless) response: Keep them in Friend Request Limbo, i.e., that murky in-between space where you can click "accept" at any minute but they're still unable to access your profile. It's one-way Facebooking.

Right response: Say no for good.

Facebook has of course made this difficult -- they've replaced "Reject" with "Not Now" so you need to wade into their Byzantine menus to say sayonara.