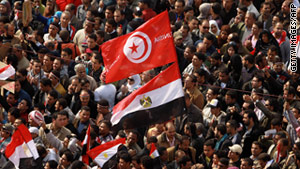 (Mashable) -- Egyptian President Hosni Mubarak has stepped down, more than two weeks after the protests that began January 25 in the country -- and launched a flood of #Jan25 and #Egypt tweets as well as media coverage that broke the mold -- to remove the president from power.

From the beginning, the revolution in Egypt was propelled by the use of social media. It at least partlybegan on Facebook with the creation of Facebook groups that gained hundreds of thousands of members and promoted the early protests in Cairo.

Subsequently, the government blocked Facebook and Twitter and eventually shut down Internet access completely. And with the outside world following the unfolding revolution online, political leaders and others, including Twitter, spoke out against the violence and freedom of expression issues at risk.

But even a government shut down couldn't keep the news from flowing. Twitter and Facebook users found ways to work around the blackout. Though, eventually access was completely restored.

'A dream becomes reality' in Egypt

The events in Egypt served as a flash point for journalists on the ground, too. For perhaps one of the first times in history, history itself has been recorded instantaneously, as reporters took to Twitter to share 140-character updates and personal stories from the protests. The messages provided a stark reality to readers in the outside world, especially as the protests turned violent and police turned on journalists -- the very people many of us outside the country were following.

But Al Jazeera had its "CNN Moment," and although it couldn't reach viewers in the U.S. by cable television, it found a way to viewers -- on YouTube. The network live streamed Mubarak's public address -- in which many believed he would resign -- Thursday via YouTube. But Al Jazeera's comprehensive coverage put it on the radar for U.S. viewers and it created a campaign to bring its English-language network to U.S. televisions.

Images of the turmoil spread around the world via Flickr and Youtube, too. Al Jazeera made its images available by a Creative Commons license and its work reached an even broader audience around the world.

Without a doubt, social media, mobile devices and the web have brought the stories from Egypt closer to home. And conversely, the events in Egypt have shown the strength of these tools for both organizing and informing people. The Egyptian people and reporters alike found ways to share their messages even when the government tried to stop them. Using VPN, proxy sites, third party apps and other tools, they were able to continue sharing news with those of us on the outside. And at the same time, the rest of the world found ways to use tech to curate and disseminate information.